Night ride to Marion... and other good things...

Pics of yours or other interesting bikes taken out and about. Reports of Choppers Australia rides, with lots of photos and great stories. If you are not confident writing up a story, email Prof & get some help... choppers are all about riding, so let's hear your stories.
Post Reply
1 post • Page 1 of 1

Night ride to Marion... and other good things...

Earlier this year, I suggested to a couple of our blokes that we set up a regular monthly bike gathering. The idea being that it would become a place bikers would know there'd be something going on.

Nothing had happened being winter, but I mentioned the idea to Oscar, one the guys who is often here working on his cars and bikes. He responded that there were a couple of monthly gatherings at Marion Shopping Centre... a mixture of cars and sports bikes mainly and he often went there.

Tonight, was the next gathering, so I organised with Oscar to head down there together. Showers and high winds were forecast. Oscar ended up working on his bike most of the night before and came home from work bushed.

I was ready to go and decided to head off there anyway. Victor was keen for me to catch up with his hotrod truck project, so I figured if not much chopperish was happening at Marion I would cruise around to Victor's.

It had just stopped raining when I rolled the shovel out of the workshop, so I left off my water proof coat. Bit of a mistake because it poured down a few minutes later and I had to to pull up and put the coat on in the rain and gusty wind. Hands were now wet and if you ride in the rain you know what a pain it can be to get your gloves back on. The inner cloth lining gets all stuck and you fingers get jammed part way down. Solution is a piece of dowell about 8" long to push back the lining into the glove's fingers. I keep it in the pocket of the jacket. Got used this time. As I tried to dry my hands with a hanky, that blew away and I had to chase it down the street!

Well, I finally got going again. The motor was definitely warmed up by now as it had been idling the whole time.

The rain stayed with me through to Morphett Vale, but with thermals, quilted shirt, jacket, water proofs, fur lined flying boots, and a small wind screen to hide behind I was cosy and warm... just pin pricks of the rain hitting exposed parts of my cheeks.

But I do enjoy riding in rain... watching the drops curving in towards me illuminated in the headlights, seeing the spray of water coming off my front wheel. The sheet of spray flies high off the wheel and sweeps back or to one side depending on the direction of the wind. It shoots out to the sides at the bottom of the wheel and tonight in the darkness was also illuminated by other car light and streetlights.

I also think the reflections of the lights on the wet bitumen is pretty cool too... all the while my faithful shovel motor pulsates beneath me, roaring as I open up the throttle to race pass a car, pulling back on the bike as I throttle back and idling steadily at the traffic lights...

I called into a tent place at Hackham to pick up my repaired tent which they left out the back for me. Bit of a chore juggling torch and tent and octo straps in blowing rain, but I got it tied on, did my hand drying and dowell trick again and headed off into the rain once more. Next stop Marion.

The undercover park at the Shopping Centre was packed and noisy with revving cars.

This old fogey idled up and down the aisles looking for the motorcycles. Got some positive comments and amazed looks as I passed groups of onlookers. Finally found a triple Triumph and pulled in alongside. The young rider came over and we talked bikes and wet weather for a while. Then we parted and I figured I'd wander around and check out the vehicles and maybe find some custom bikes.

These were the only bikes I found... 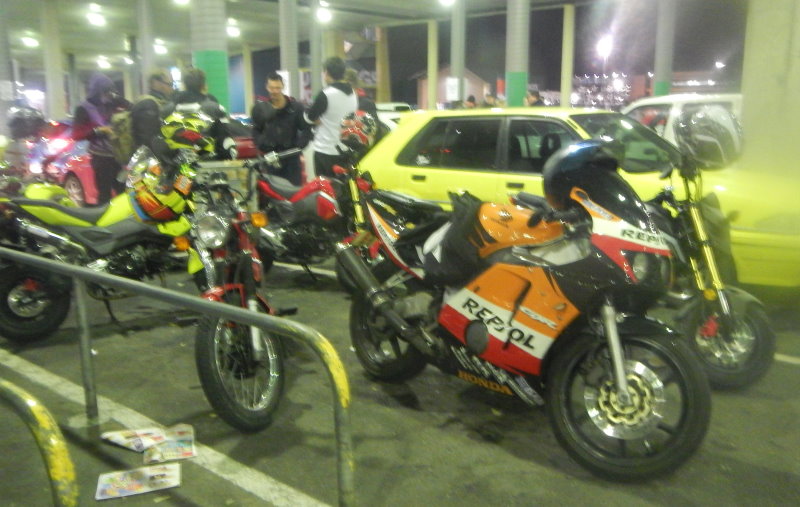 Some interesting cages though... 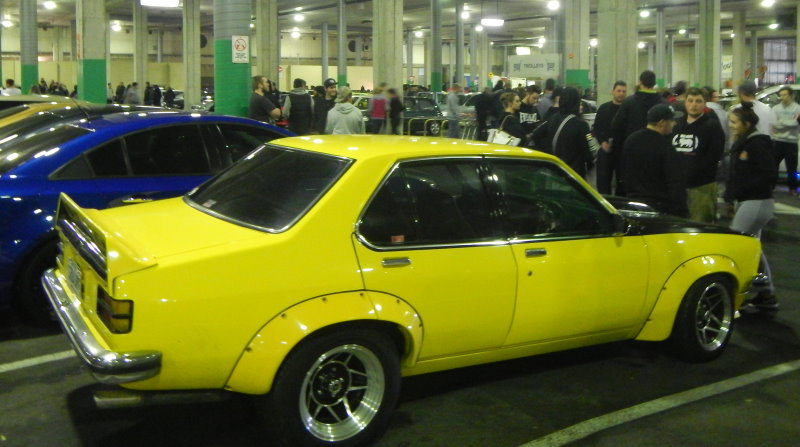 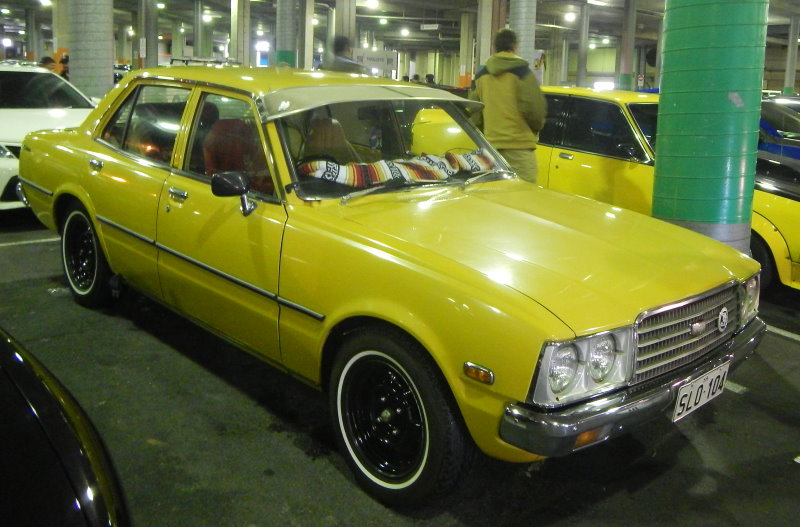 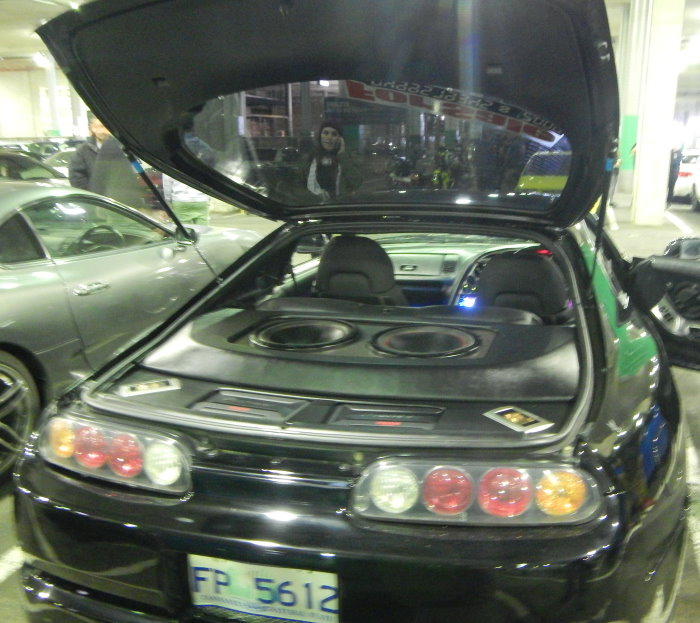 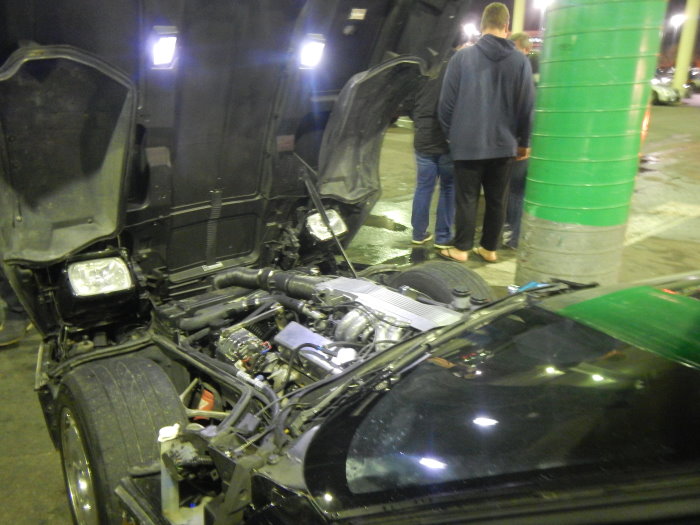 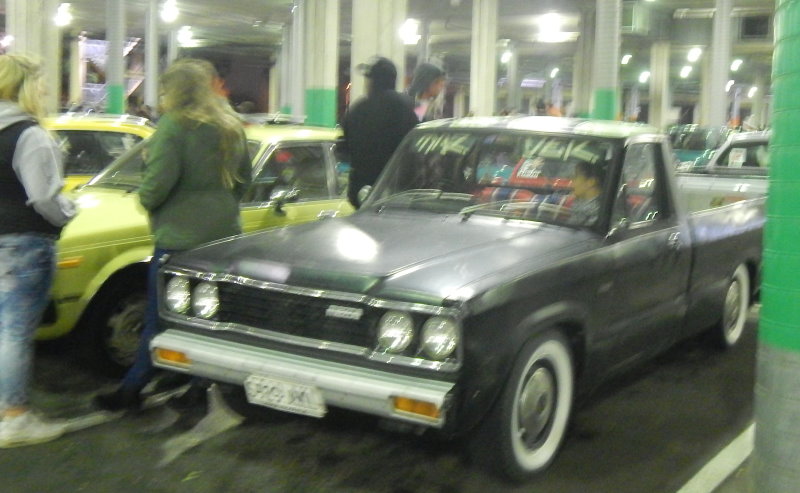 Nothing much was happening bike wise and as it was still raining outside I figured I'd head off to Victor's. Try here again in a month. Rain ceased as I rode out and stayed away until I headed home a couple of hours later.

Spent an enjoyable hour inspecting and being shown over his hotrod truck. In fact had such a good time that I forgot to take a photo for you, but Victor did one for us. Heinz is a 29 Ford A ute or at least the cowling is! Victor has built the chassis to the A dimensions. Front axle is vintage Ford with disc brakes and transverse leaf spring. Rear will be an XF Ute axle and wheels with another transverse leaf. Steering box is an old Morris and steering wheel HD Holden. Body is all hand built. The ute is powered by a Toyota 18R motor (4 cyl, 2 ltr) with a toyota 5 speed manual behind it. He's doing a great job the theme being old, used and not flashy. Will have a low windscreen and no roof. I'm definitely looking forwards to riding in the finished jalopy. I suggested to his mum she buy him an Ed Klampert hat to use when he drives it plus a chook in a cage hanging off the side! 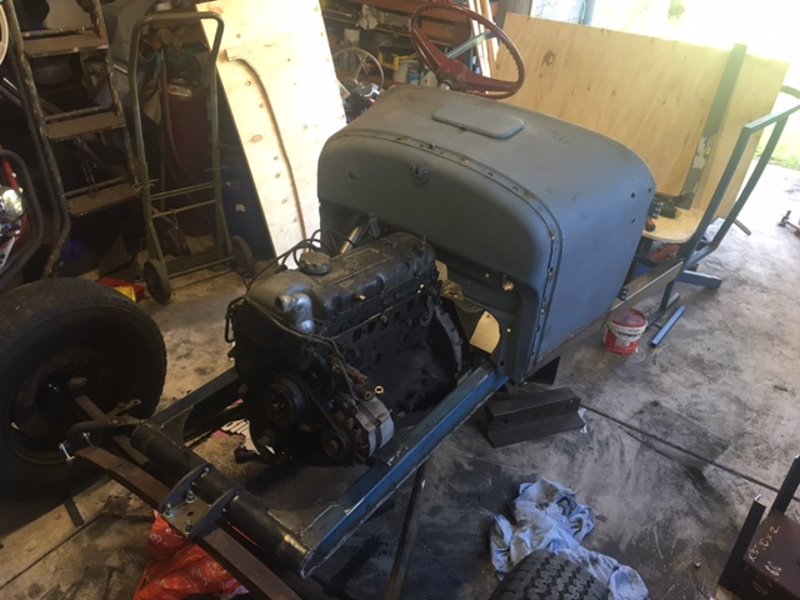 Victor, his wife, her sister and a friend had arranged to drop into a crepe place on Henley Beach Road. After calling them to say we were on our way, he rolled his shovel chopper out of the shed and after a serous number of kicks it started. He has only just registered it again and fuel was pretty stale. Stop at and servo for clean fuel.

Then experience the blast of two choppers riding side by side, accelerating away from the lights, rumbling to a halt at the next lights and blasting off again. The girls were just walking up to the cafe as we pulled in, riding along the wide foot path and parking alongside the joint.

My strawberry and chocolate crepes were pretty good, and the Belgian hot chocolate... smashing!

A good time with plenty to talk about, choppers, Victor's new shed, chopper rides and hotrod building and then time to take off. Had to convince the girls to pose with Victor, but such is my charm I had my way... 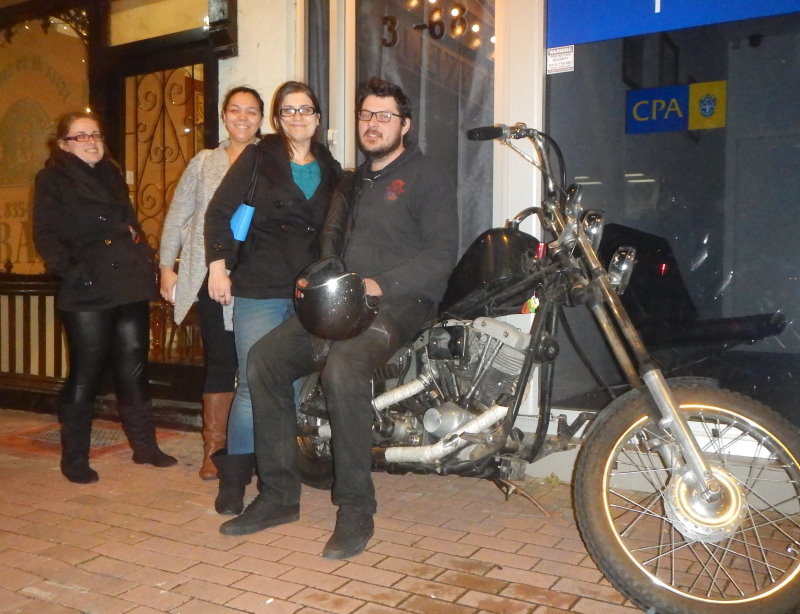 Fire up the choppers and then bounce over the curbing onto the road and off we blast again. Victor turns for home off Goodwood Road and I continue on. The roads are wet but I only hit a couple of patches of rain. Up the express way a headwind builds up. At one point rolled up paper charges towards me, flashing past propelled by the wind. I put my hand back to check my tent on the back and have to force it back to the handle bars... that gust must have been at least 30mph giving the effect of riding at 90 plus mph.

However, I'm snug as a bug in a rug and enjoy my ride home immensely.

Finally rumble up our long driveway and around into the workshop. Pull up , snick into neutral, lights off, sit and listen to that marvellous Harley idle and reluctantly switch off.

Waterproof and warm... the moon man in person... 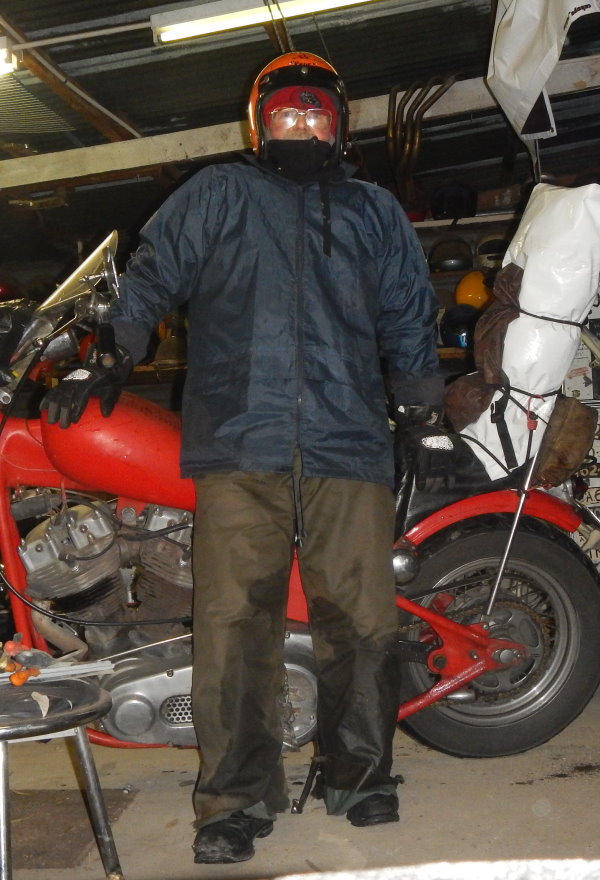