Pics of yours or other interesting bikes taken out and about. Reports of Choppers Australia rides, with lots of photos and great stories. If you are not confident writing up a story, email Prof & get some help... choppers are all about riding, so let's hear your stories.
Post Reply
3 posts • Page 1 of 1

Wheeled the shovel out of the workshop at 5am, grabbed a bit of brekky and at 5.30 hopped on my faithful ol' girl and rode down the drive into the black night. Weather was mild, but with no light from moon or stars, I kept around 80k in case of roos. None showed but it was shear pleasure to be cruising the back roads withe wind in my face and the regular beat and mild vibration of the big V twin beneath me.

Only saw a couple of cars. One set of lights sat behind me most of the way, but I lost sight or them out of Echunga. Thought they might be heading to the same destination.

I pulled up at my normal possie just inside the oval gates and walked back to pay my $5.00 entrance fee. Everyone who comes in the gate see the chopper and the small CA flag and can grab a brochure off the front pack if they are interested. A couple got taken today.

There was very little bike and no chopper gear this time with the exception of a 12" over springer that was also at Willunga Swap last year.

This stall advertised his anodising service with a tidy little collection of samples to wet the appetite... 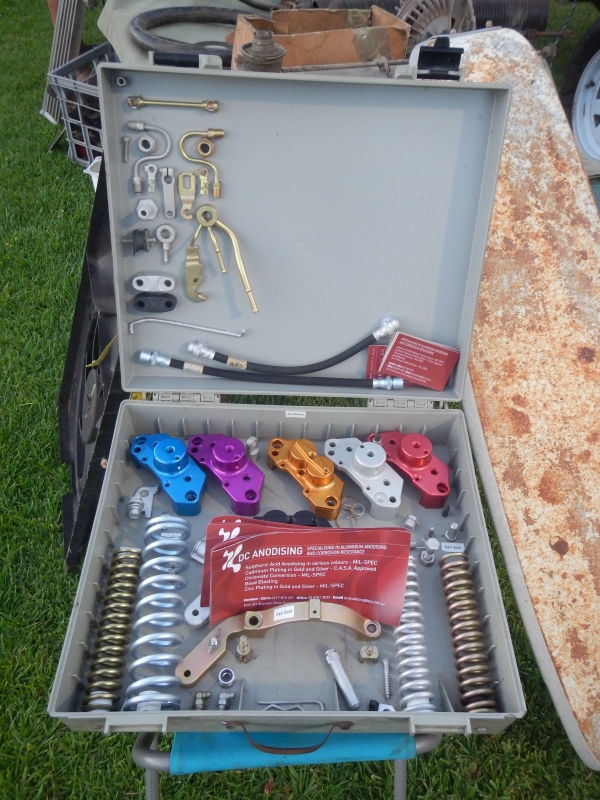 Only two older vehicles for sale including this very cool 69 Chev panel truck at $20,000... 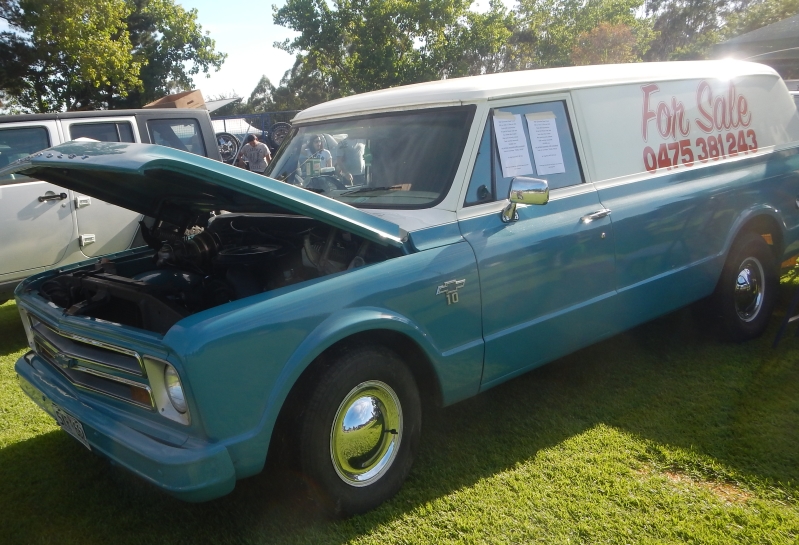 Some interesting bikes rolled up including a new Ural outfit and this Indian... 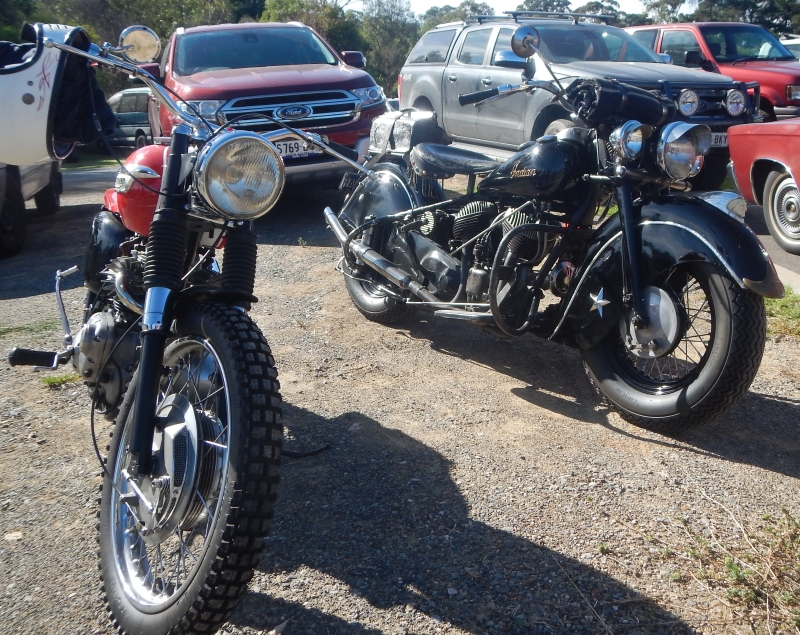 Having finished my final round of the swap meet, I returned to my chopper to see two familiar choppers ridden by CA members Wayne and Terry... 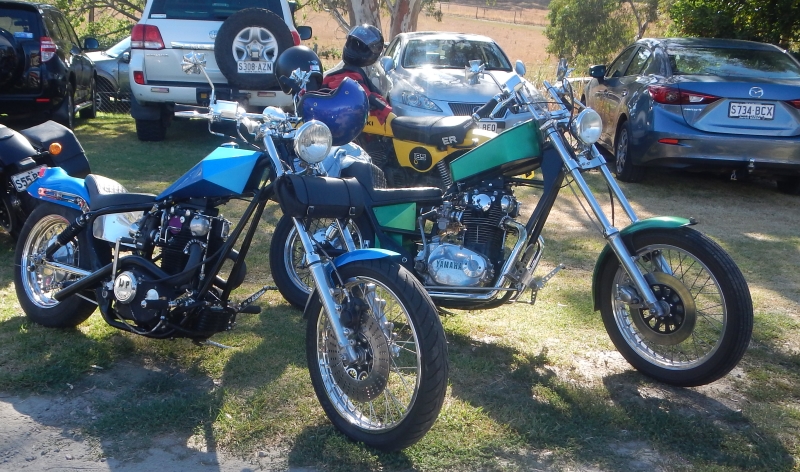 Rayne's S&S Pan was also parked by my machine thus making a striking entrance to the swap meet. Rayne has been away for over a month and was definitely getting withdrawal symptoms, so lit out this morning. Rob and Jason were also waiting... by tintop in case they were able to purchase some useful gear. Chris, past CA member also came up for the drive. He blew up his Sporty years ago and is still saving an gathering parts... 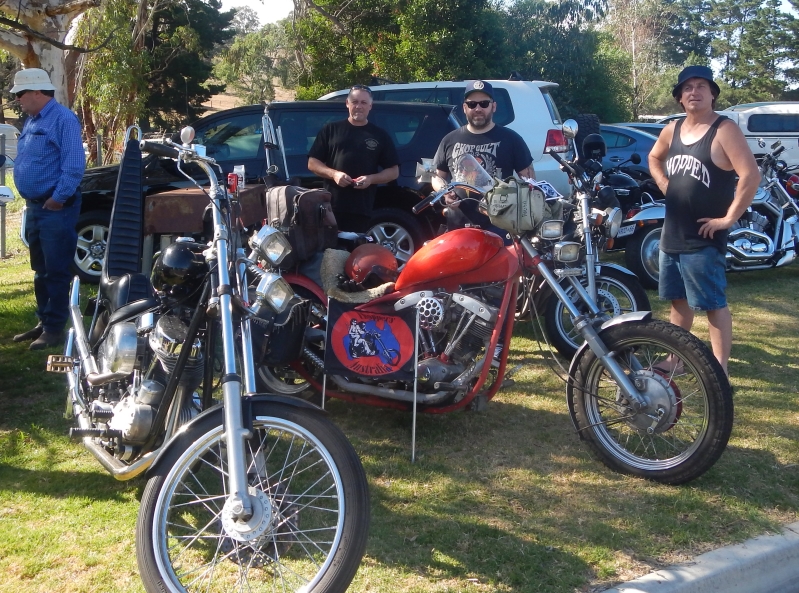 At our November Muster, the northern members were keen to have a Northern Muster in February, but after some discussion today, decided they did not have the time to organise it properly in time... looks like just a simple overnighter camping by the Murray. Stay tuned 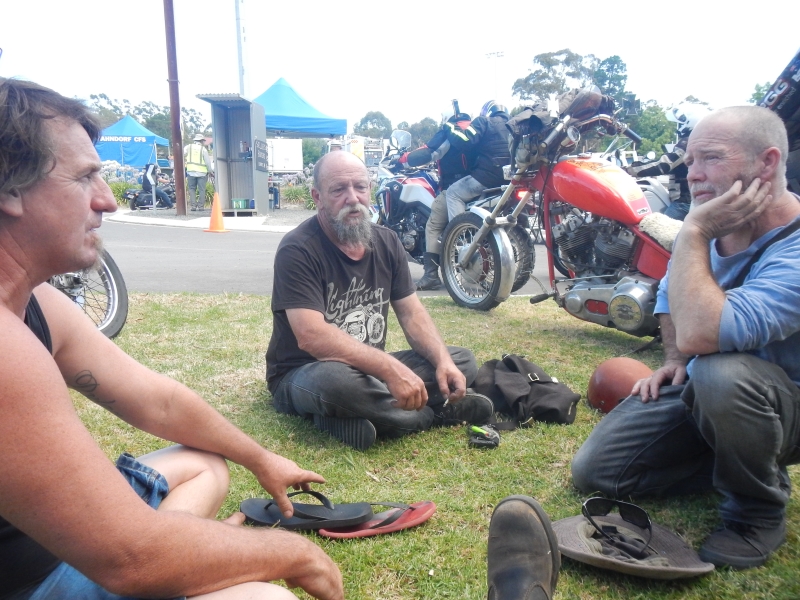 A Toy swap meet is also held in Hahndorf to coincide with the swap meet, so I said my goodbyes and trundled down there. I had a large box of Hot Wheels tracks my son came across and took it in to see it anyone could get some use from it. One of the sellers reckoned he could. Had a chat with Robbie who I grew up with in my first seven years and then time to go.

There's a road (Paechtown Rod) just south of Hahndorf that parallels the Freeway. I've always wanted to ride it, so swung left and had a delightful slow ride to the outskirts of Mt Barker. The bitumen gives way to some twisty up and down dirt... which I do enjoy, just idling along with varying scenery, overhanging trees and tight gravelly corners... cool!

Since I've been putting in a fair bit of work effort I decided being Sunday morning still, I would take the 'long way' home and traversed some more interesting back roads. By the time I came through Kangarilla, the heat was building to about the maximum before the incoming breeze was no longer cooling unless in the shade.

A most enjoyable cruise home.

As I said, not much to purchase, but these spanners always seem to go missing to I did a stock upon them. Any chopper jocks out there interested in some classic 70's fibre glass panniers? 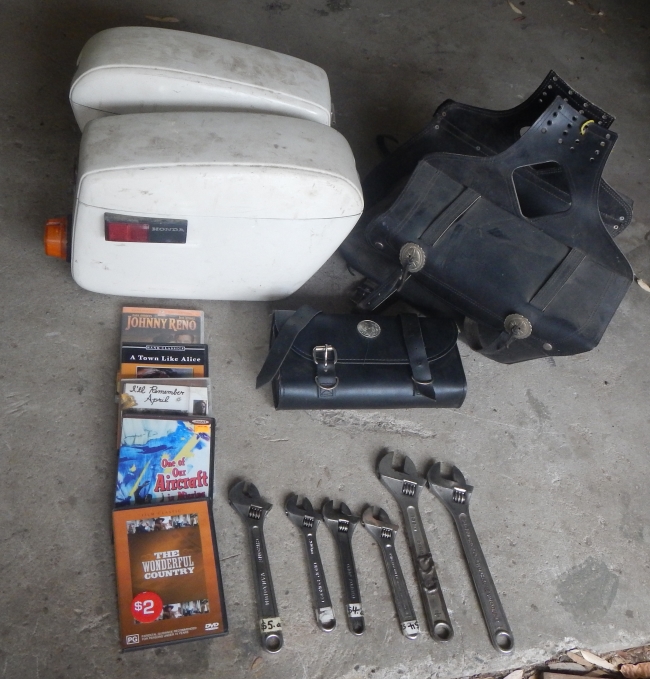 Next one will be Feb 4th at Victor Harbor although this one does not have a lot of stalls and not much bike stuff... but you never know... good excuse (not that I need one) for another early morning ride.
Chopit'nrideit... Prof
Top

Great turn out by the Choppers Australia crew. I'm looking at the same blue Chop on my calendar right now

They went for quite a cruise after that I believe... was a good day for riding though a bit hot as the day wore on.
Chopit'nrideit... Prof
Top
Post Reply
3 posts • Page 1 of 1