Pics of yours or other interesting bikes taken out and about. Reports of Choppers Australia rides, with lots of photos and great stories. If you are not confident writing up a story, email Prof & get some help... choppers are all about riding, so let's hear your stories.
Post Reply
8 posts • Page 1 of 1

Slotted in a Midnight Ride in May the day before I took off for Queensland again to help my son. Promised to be cool but clear, so I expected a few less than for the summer months. As it turned out, two of our regulars were away a grand total of two enthusiastic chopper jocks rolled up.

The ride into the city was most enjoyable (as any ride on my shovel chopper always is!). Meeting was at Villies on the Main South Road, Richmond. Major works are happening at Darlington and although the road for a couple of miles is slower and bumpier than whipping down Marion Road, I think all the roadworks are pretty cool and like to see what progress has been made since I last rumbled through. I'll stop and take a few photos next time, but as it was after sunset, a bit dark this evening.

Some blokes hate city riding, but despite its length and weight, the shovel is very nimble in traffic and I enjoy filtering when I can and love accelerating out of the lights... both of which I got to do this night.

Peter W was waiting at Villies as I rolled in and parked in our usual spot. This night was the last day of registration for his bike, which will be off the road for a while to do some major mods, so he was determined to get in one last ride... 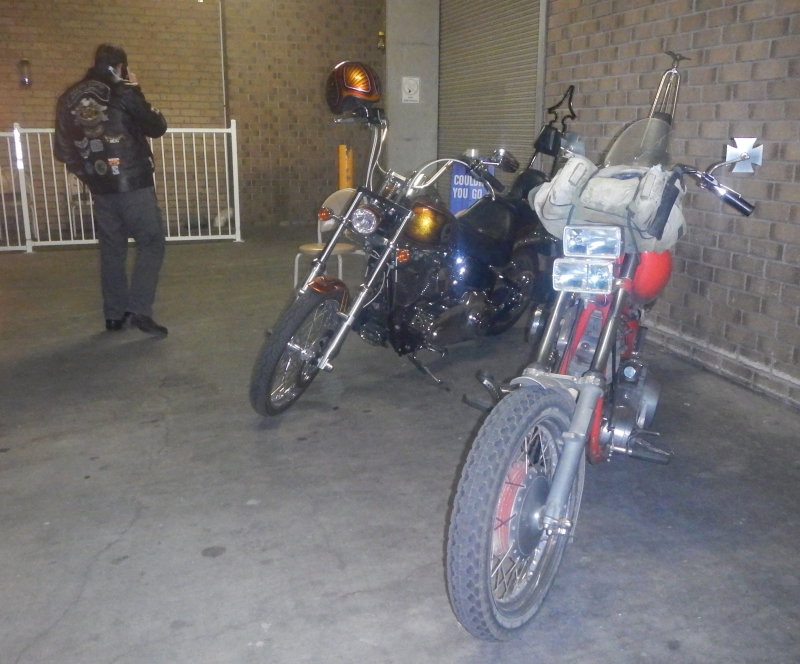 A short while back, I copped a stone off a truck which busted a head light lens. I had no replacement (the trouble with running 70's driving lights), so put this set one. They are not the prettiest, but are unique in having a pair of halogen globes in double reflectors. One is for full beam and the other a spreader for fog. I've tested them in the back yard off a battery and thought they would do a reasonable job, so thought I'd give them a try. I've set each slightly off to one side so I get wider spreads on high beam and low beam... and wow! The best lighting I've ever had... long and bright high beam and wide low beam... absolutely brilliant, and I will definitely be sticking with them. I just need to find a couple more so I have spare lens for the next rock that comes my way... 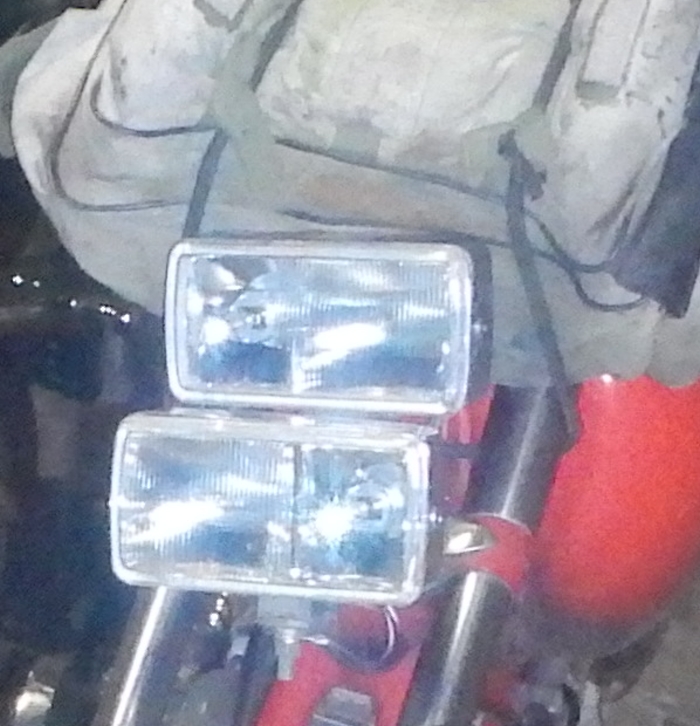 We waited around for half an hour, and with no one else showing up decided on something a little different. Peter had been wanting to invite me over to his place at Holden Hill and his wife who used to enthusiastically be on every Midnight Ride has been unable to come due to a back injury and it would be nice to catch up with her... so off we went... 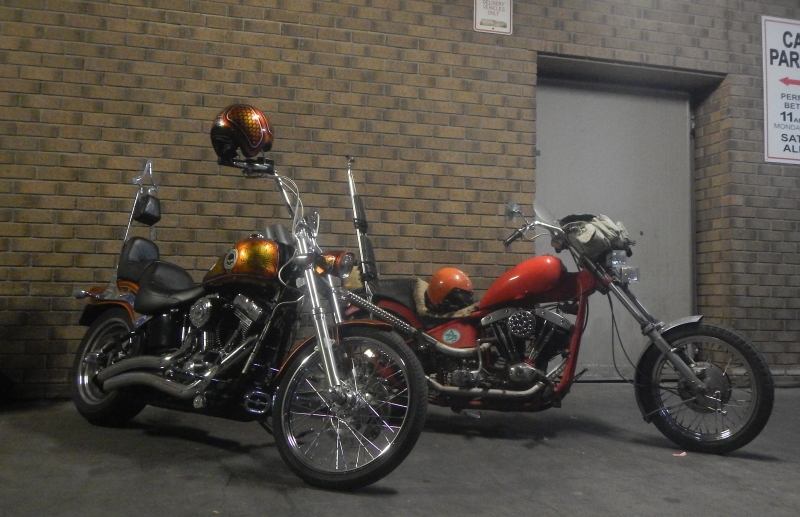 Peter's twin cam has some get up and go and let me know it at the traffic lights. Although my 74ci shovel is a pretty quick motor, I couldn't compete with the 88 cubes... but we had a good time, cruising side by side and blasting out of the lights.

Spent an enjoyable couple of hours with the W's. Checked out his airbrushing room and got to see her paintings and craft work. Finally time to set off for home. The neighbours heard the shovel start up and then die. Blown fuse, which seems to happen every 6 months! New fuse and the neighbours had the privilege of once again hearing a quality sound, this time on start up and as I roared off up the street!

Streets were fairly quiet as it was now around 11pm. Outa sight riding dark deserted streets... straight out of a movie. Cruising down Main North Road, I noticed a new Harley shop on my left and did a sweeping U turn to go back and check it out. A number of custom Harleys in there, but nothing old school. This machine was parked in the auto showrooms that are part of the building. Not a thing I'd be interested in riding except just to have tried something with a crazy big front wheel... 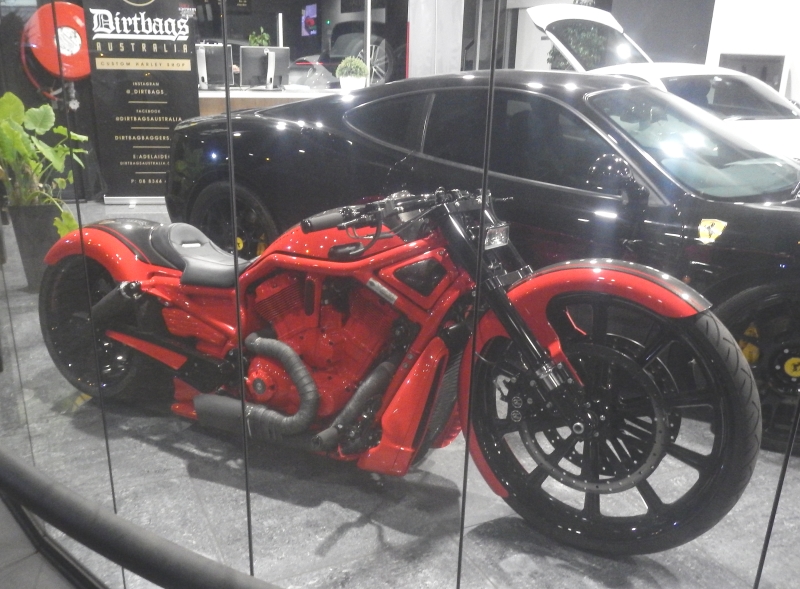 I'd been told that Pancake Kitchen no longer opens 24 hours. End of an era. When I was at Teachers college in 1970-72 this was a regular stopping place at ungodly hours of the morning when us bikers had spent a few hours cruising. Went in during the day as well, and it was a place for hippies, uni students and other crazies. Had real atmosphere.

Guess modern wages have killed the 24 hour bit. So Pancake Kitchen was out. I'd heard there was a Villies in North Adelaide and so rode slowly down O'Connell Street to see if I could find it. This 24 hour Cafe came into view, so I cruised past, did another U turn and pulled up out front...

Had some enthusiastic customers inside and out and I grabbed a sausage roll and a hot chocolate and sat outside as close to my chopper as I could.

Figured I'd still ride into Hindley Street and see if the Kitchen was really closed, and alas, it was. Weaved my way slowly through the narrow alley way, past folks out side a bar and then cruised back towards home.

Temperature was still mild in the CBD, but dropped drastically as I hit Anzac Highway and the Park lands. Warmed up again through the rest to of the 'burbs as me and my chopper just ambled south. Then a blast up Tapleys Hill with only a couple of other cars in sight. Temperature dropped again once I was over the hill.

Ride home along the Expressway was most enjoyable as usual... nothing really beats the sound of a shovel motor through open pipes, siting back like a king with not a care in the world.

Was a different Midnight Ride (as they all are), but what can be better than spending some time with friends and cruising the black top on a classic Harley chopper?!
Chopit'nrideit... Prof
Top

Yeah it was a shame I didn't get that last ride in but it was great to finally get you over to my house after knowing you for all these years. We had a great time just chatting for a few hours. By the way my 88 cubes are actually 110 cubes with a torque cam and yes we did have a bit of fun at the lights without getting stupid about it. I had a great night so thanks Professor..........

Almost double the size of my donk. No wonder!
Chopit'nrideit... Prof
Top

Do those new lights have a chrome housing Prof?

The housings are steel, but black. I have temporarily painted them with spray chrome. Will get them chromed when I get my new pipes chromed. I'll put up a couple of better photos of them tomorrow if I can.
Chopit'nrideit... Prof
Top

Some better photos of the double twin headlights. I'm really sold on them... just want a couple more for spares... 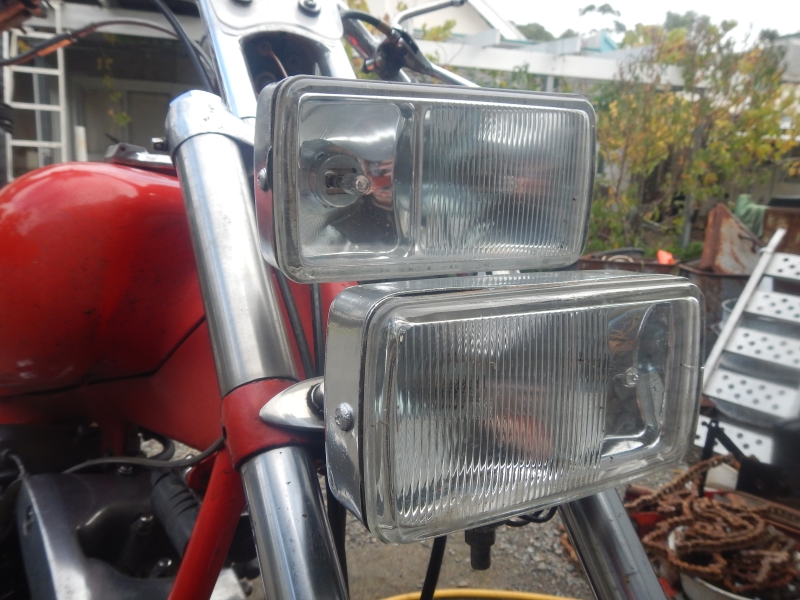 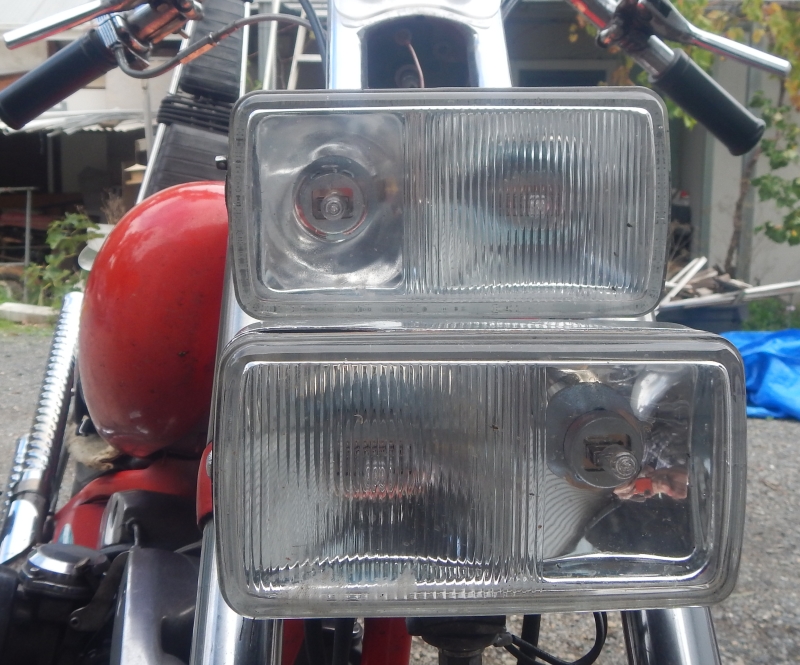 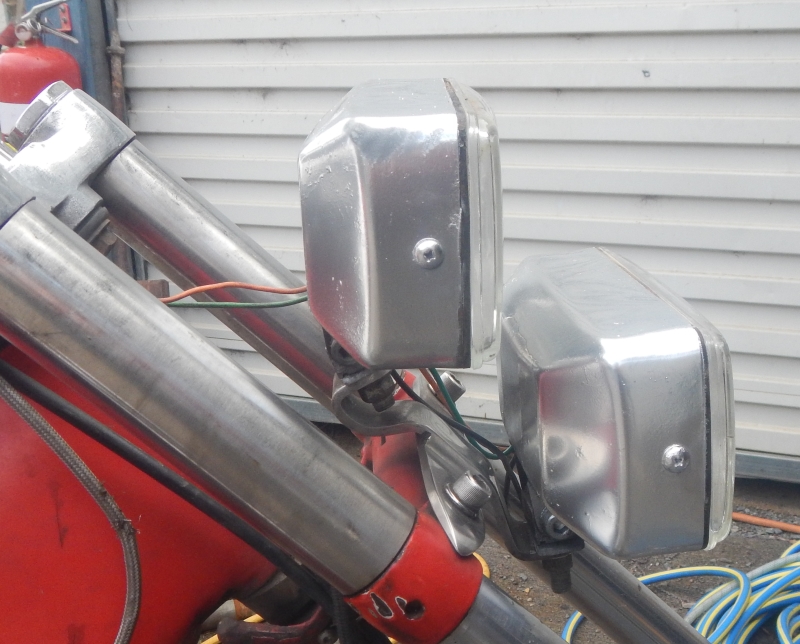 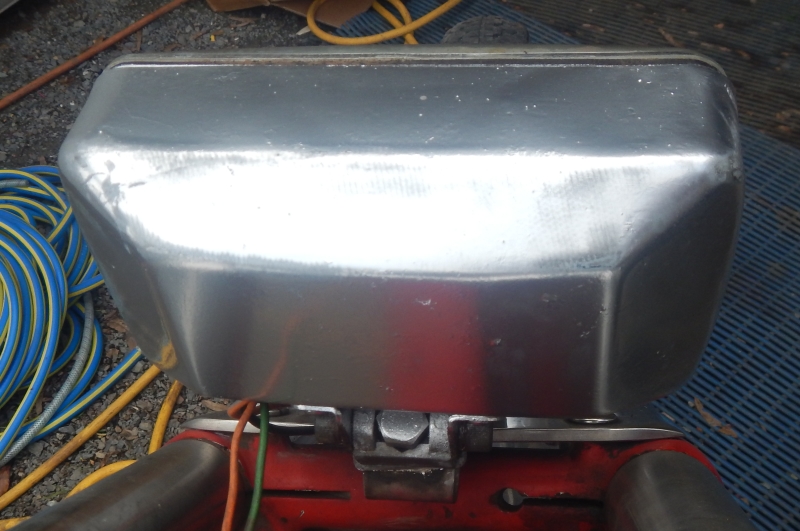