Chopper Al's 73 Bonneville chop...
I bought the bike from a guy in Melbourne in 2003. He’d bought it off the builder, and owned it for about five years. This how I rode it for a number of years, before this currnt update... 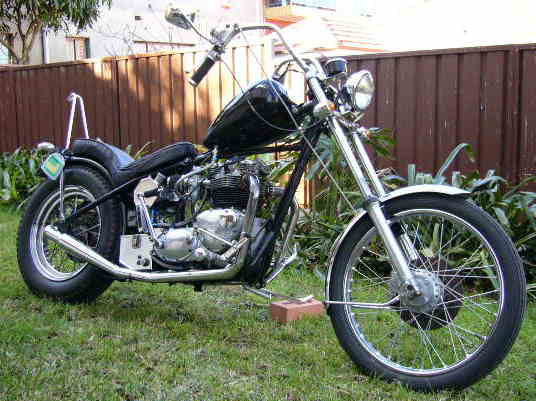 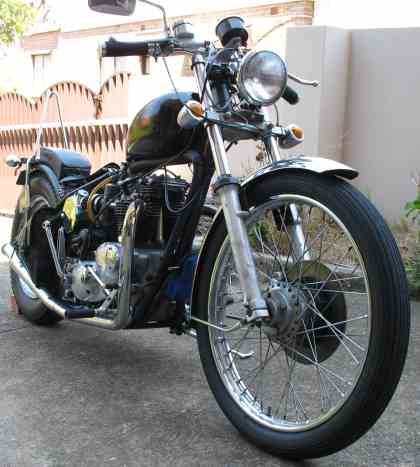 The front wheel is a 21 inch Avon with a single disc brake. The forks originally had 6” over tubes on them, but I changed these to stock. The neck isn’t raked.
The headlamp is a 5½ “I don’t know what”. I bought the Wassell peanut tank off eBay and had some tabs welded on. I then sprayed it with a can of my favorite shade of gloss black followed by a couple of coats of clear. It came out pretty well.
The 7/8” drag bars are held by 6” dog bone risers, tilted back for a bit more comfort. 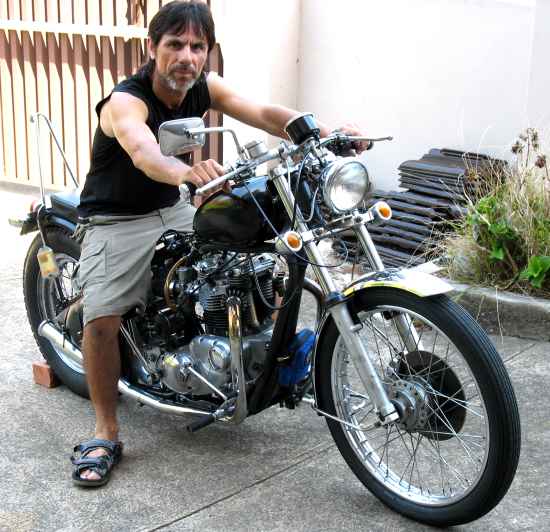 The riders saddle is a Bates... with vinyl and foam removed and painted (what else?) black. Don’t let those bolts frighten you. Everyone asks me if it is uncomfortable - it isn't. I fit onto it just right. The longest I've ridden on it continuously is about two and a half hours. I didn't even notice. It’s very comfy!
I made the pillion pad using leather from a jacket I had lying around. It has foam from a $10.00 yoga mat layered and glued together, and a piece of aluminum for a base. This one had to be extra comfy in order to get my wife to ride on the bike.
Replacing the old 6” over tubes with stock forks made cornering a bit hairy. With the forward controls now a lot closer to the ground, often the mildest turns made the hairs on the back of my neck stand up. The chunky Harley type footrests had a bad habit of hitting the ground and pushing the back wheel off its line of travel! So they had to go. Removing them left me with the stems. So I covered these with some car radiator hose. Now I can lean it a bit further before breaking out in a cold sweat.
While a local mechanic was doing some work on the bike, I got him to fit an oil filter. I think he did a great job placing it in front of the oil tank. 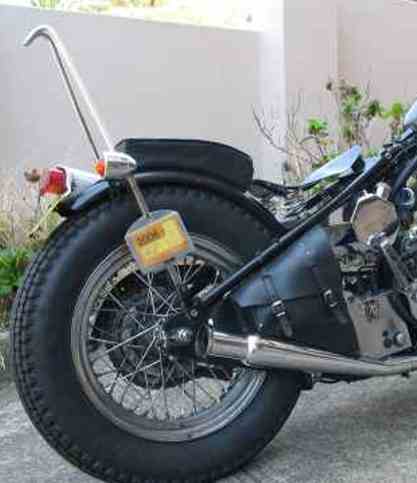 I’d always liked these upswept mufflers. A friend of mine had them on his bonnie back in the 70s. So when I saw some on eBay, I couldn’t resist.
I made the tool bag after seeing a really cool one (sort of) similar to it on the Zero Choppers web site for around US $300. It took me ages to hand stitch it, so I’m not in any hurry to make anything else out of leather.
I love the look of a hardtail. I think this one might be a couple of inches over length. And at the moment I’m happy to put up with the “kidney punches” on bumpy patches.
The wheel is a 16” Harley rim laced to a Triumph QD (Quickly Detachable) hub. The tire is a 5” Speed master II. I had to have it offset about 15mm to get it away from the chain.
It’s been a reliable bike without any major dramas. I ride it to work most days and every now and again take it out on longer runs. But I’m seriously thinking of buying something with a little more performance for longer rides, possibly a late model Thruxton 900 or late model Triumph T100. If I bought a new one the plan is to keep it stock till the warranty runs out, then chop it.
Chopit'nrideit... Prof
Top
Post Reply
1 post • Page 1 of 1