I bought the Triumph in March 2006. It was a good basis for a bobber, but needed cleaning up and some repairs...
eg. The risers had been mounted using garden hose instead of rubber so the bars turned 1/2 inch before the yoke started moving! Also the seat was mounted s0 that checking the oil was a major mission (not good for a Triumph!), the brake light switch was missing and there was quite a bit of rust around.

I wanted to stick to a modest budget so all the rust was wire brushed off to see if it was presentable. It took about 4 nights in the shed and a Saturday to wire brush all the spokes with a Dremel and then polish!, Surprisingly a lot of the metal parts were still ok and only about $200 was spent on chrome (Gold Star-Hackham).

I also wanted to have a go at my first paint job without using spray cans, so armed with some Jet Black 2 pack, a respirator (a must when using 2 pack), undercoat, (Cost $250 from Paint Supplies-in Lonsdale) It would've been a lot cheaper if I got it right first go! With a gravity spraygun ($50-internet) I gave it a go.

A good word to use here is Perseverance! After rubbing back and starting again 5 times I have learnt the following:-don't hang all your bits at once in a 1.5 x 3.0 shed, don't paint in 40 degree weather, make sure you have good lighting, don't paint without a water separator on your airline, oh.…and orange peel looks cool!

I wasn't happy with the style of the bike when I got it and wanted the old school look. The major parts that were changed were… stock Triumph fuel tank to a Sporty tank ($100 from 2 Wheel Dismantlers in Hackham), cobra seat to a single saddle with 2" springs ($35US-US via internet-can't remember the company), flat bars to 19" apes ($49 at K&M-Richmond), sissy bar removal, stock foot controls to forwards ($100-ME!!!)
Fabrication consisted of welding a flat bar bracket to the front down tube for the forwards, bracket welded above the oil tank for the seat springs.

As the top of the fork tubes were quite pitted but the chrome where the seals ran was ok, I made up a cowl out of 1mm textured aluminium to cover the tubes between top and bottom yokes. I then mounted a couple of rectangular auto spotlights to it for headlights ($30 from Supa Cheap Auto at Noarlunga).
I used the same material for the battery box cover ($0-aluminium sourced from offcuts from a stainless steel factory I know). A couple of cosmetics I did just for fun were a couple of blue neons ($10 from Repco in Noarlunga) fitted under the fuel tank to shine down on the motor and a Triumph centre tank badge mounted to the rear guard below the number plate.
The forward controls were made from an idea I found on the CA website, I got 2 pieces of stainless tube that fitted inside each other and made up collars for the pedals and slugs to slide in the ends where I mounted pegs to match the handgrips and also fitted matching pedal ends. I can supply details to anyone who's interested.

One problem I had with them was that I used 1/4 inch stainless rod for the linkages, the gear shift was fine, but because the brake pedal pushed the rod there was too much flex in it so I had to change it for 1/2 inch rod.
After it was finished in March 2007 the only adjustments I had to make were to tighten the head stem nut and use lighter fork oil to soften the front end.

I still need to raise the back of the seat a bit cos if you give the throttle a serious twist you need to hang on tightly or your
bum ends up on the back guard!

I recently acquired a set of springers which have now been installed and here is the final bike... 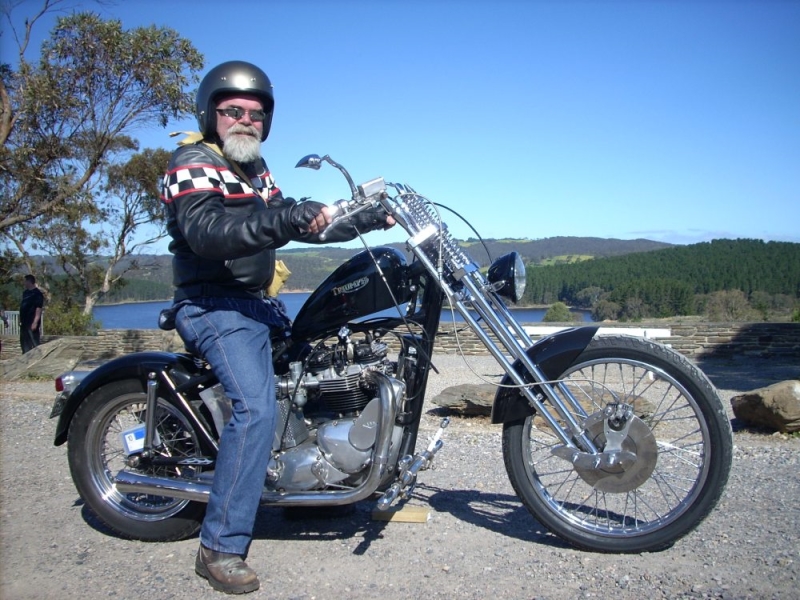