This bike started out as a stock 1982 “Iron head” XLH Sportster. It did not have a lot of miles on the clock, but as the big end was gone, the motor was rebuilt with new bearings throughout, a rebore and new pistons and rings. It could have also benefited from new valves and guides, but due to budget constraints, these will be left until later.

Note: All but the first and last two photos were taken after the delivery trip from SA to Qld.

The carbie is stock and the air filter is an after market item with washable filter. Throttle cable is a nice stainless steel item.
The bike was built by Michael’s dad the primary aim being a daily rideable chopper that would be his main transport… to be used to and from work, but to carry a pillion in comfort and do some long trips as well. 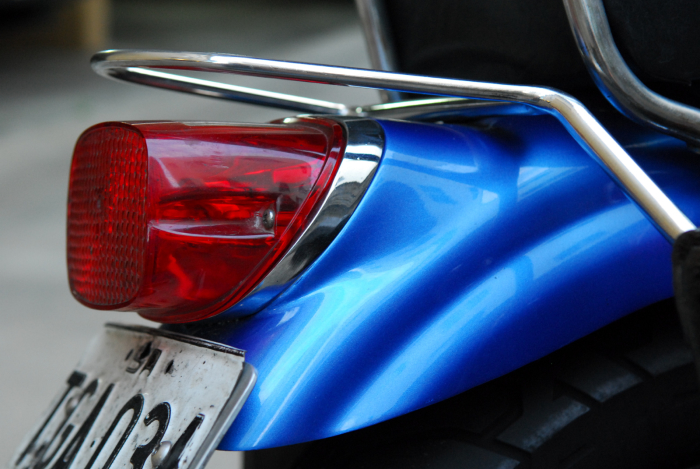 Two inches were added into the down tubes to provide an extra 6º of rake. New 4” extended fork tubes coupled with a 1½” drop at the rear end keeps the bike level. Swing arm was extended 3”. Rear axle adjustment method was changed and stainless plates protect the paintwork from the sliding axle nuts.

Michael wanted mags, so did a swap with his dad’s shovel wheels. Quite a few hours with die grinder, and mini belt sander cleaned up the casting marks and they were painted with the same “charcoal” paint as the engine casings and cylinder barrels.

Petrol tank off a 70’s Superglide is Frisco mounted, moulded in, but rubber mounted and removable with one Allen bolt. The tunnel was removed, and the fuel cap and tap shifted to provide 4 useable gallons… not bad for such a small tank. 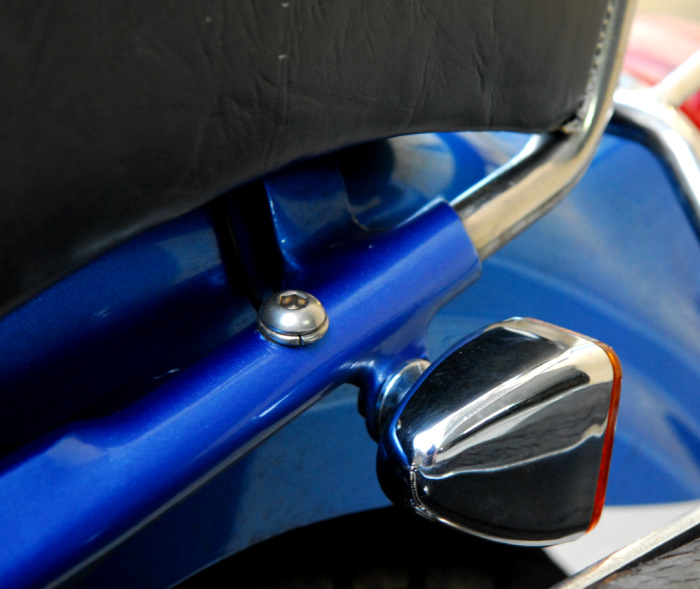 Upper and lower shocker mounts were relocated for both height reasons and to provide more flowing lines. Frame behind the shockers has been swept upward and extended. This allows the stainless sissy bar to slide in and be retained on each side by an Allen bolt.

The rear mudguard is stock but shortened and swung forward. For good looks, it was wedged behind the shockers and the side skirts reshaped to follow the line of the wheel when a rider is aboard. Stock tail light is moulded into the guard. A piece of clear Perspex has been inserted into the bottom to illuminate the number plate. 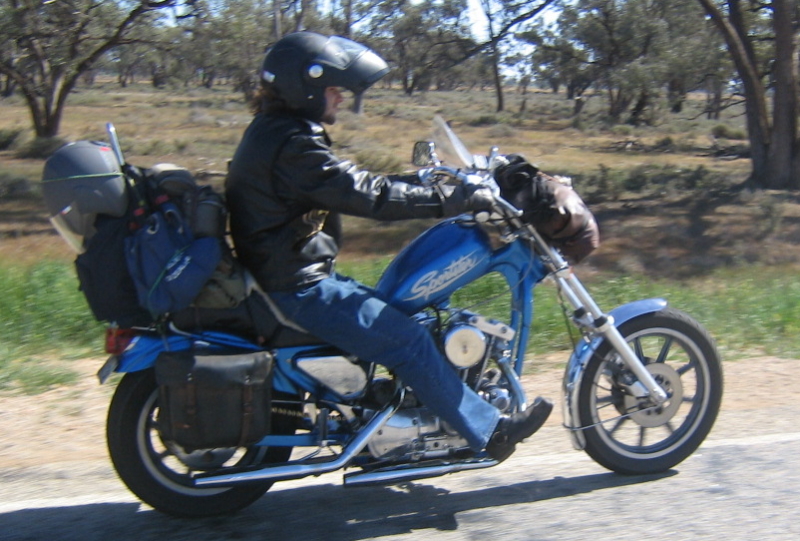 Frame, rear guard and tank have been moulded to provide smooth lines and make cleaning easy. It was a BIG job.

King/Queen seat locks to bike and has a tool box underneath. Upholstery was done by Michel’s Grandmother… at his insistence. 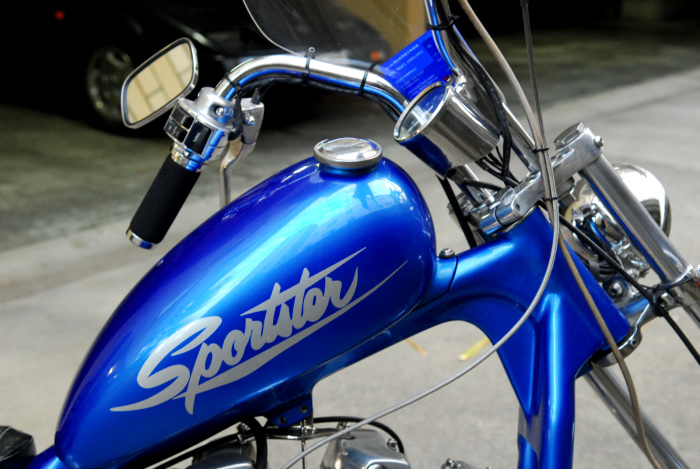 Draining the oil on these Sporties is always a pain due to the lack of clearance between tank and chain. A new drain set up was run across to other side of bike with a tap to make draining oil a real snap.

Headlight is an after-market Bates style. Pull backs incorporate speedo cowl and tell tales. Speedo is off an 81 FXS. 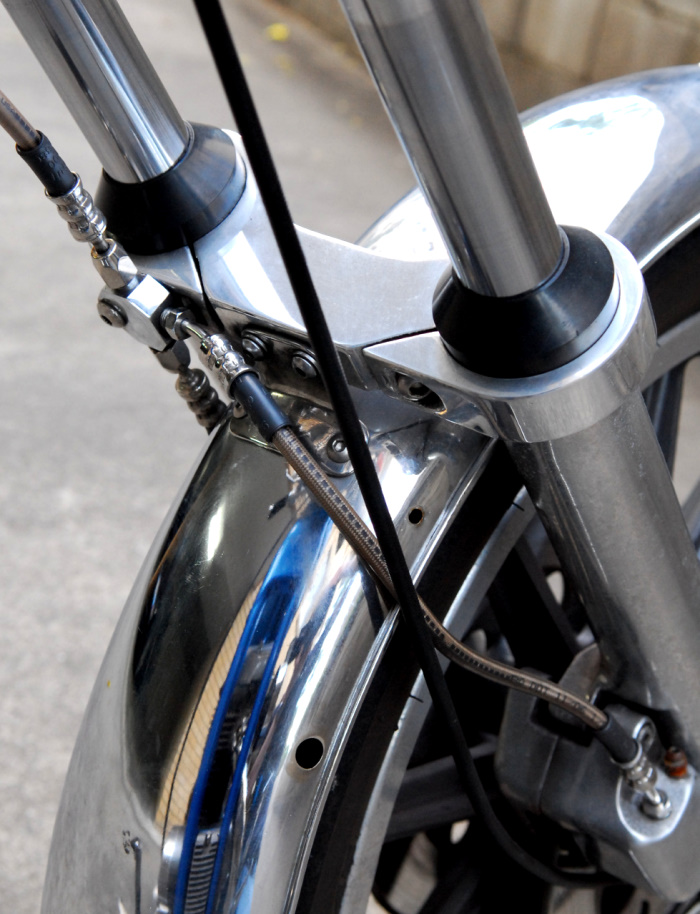 Fork brace is made from a solid piece of aluminium and retains the fork boots as well as being the mounting point for the front guard… a second hand Japanese item!. Brakes are stock and tip the bike on its nose if applied hard… don’t tell me Harleys don’t stop! 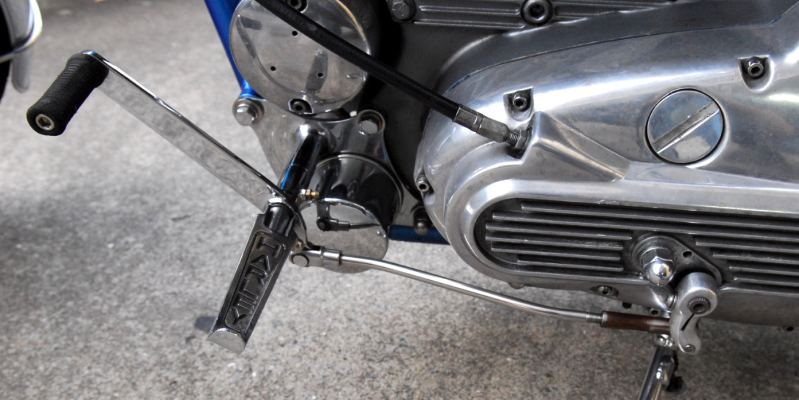 Horn is off a CB500 Honda...small and good looking. Forward controls are made from steel and chromed. Foot pegs have “Harley” inserts and were picked up at a swap meet. Rear master cylinder is moved forward and linked to the pedal by a chromed Ford pushrod. Top engine mount is stainless and quite different to the original.

Pipes are the originals rechromed. Thick heatproof paint was poured inside to reduce bluing. Mufflers are the popular aftermarket torpedoes. Chain guard is fabricated from 1¼” flat bar with a little curl and ball bearing on the tip… a Persian touch! 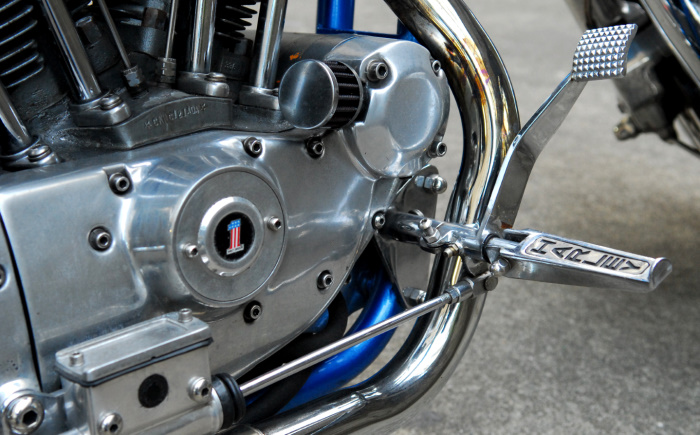 Electrics cover was widened by an inch to leave room under the seat for coil, fuses, some tools and an air horn. A two way switch allows rider to choose. Bike is alarmed. Bike has indicators… small aftermarket items… which needed a different flasher box. Harley boxes need the large stock globes to work.

All alloy has been polished to a mirror finish, a very long and arduous exercise especially the hand controls which were powder coated black.
The paint Michael chose was Yamaha metallic blue. It is a very striking colour and gets many comments. It changes to shades of purple depending on the viewing angle. 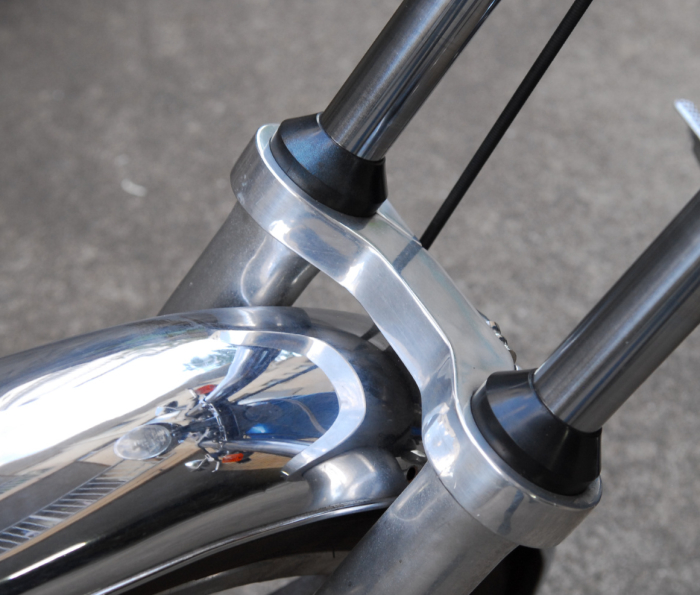 The quickly removable stainless pannier frame requires the loosening of two bolts and the removal of one. The panniers are from a 1962 R60 BMW that received Michael’s dad’s first chopper treatment in 1969.

A small windscreen is attached to the pullbacks and is very effective in breaking the wind on longer trips. It was curved over a simple aluminium mould in the kitchen stove. 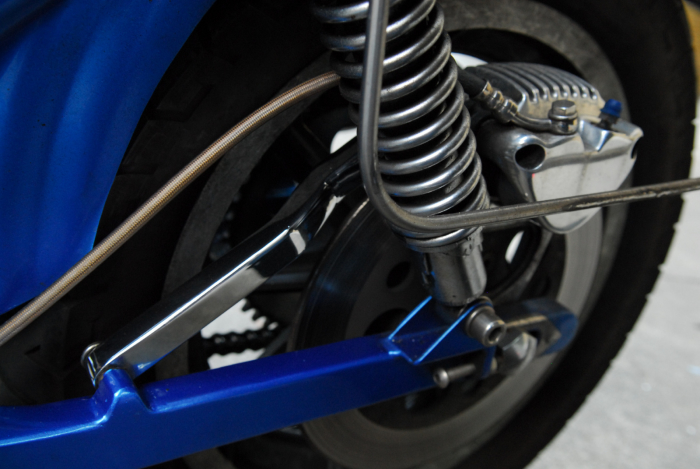 All bolts are stainless steel button head or standard Allen bolts. Every bolt can be done up with only one spanner as all nuts are retained by a number of different methods. The project took a lot of man hours, yet to be added up, but the end result is more than pleasing. It’s not strictly an old school chopper, as it has rear suspension , but never the less is home built by an individual to especially suit the rider. 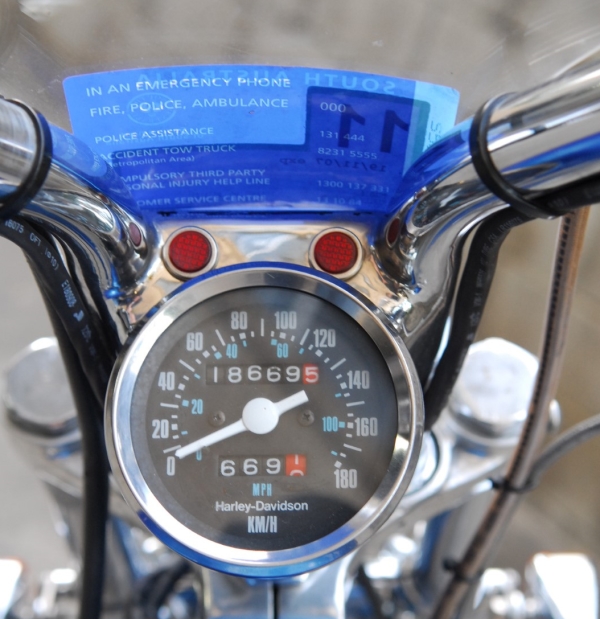 The sporty is an absolute delight to ride. It has very quick pickup due to the closely spaced first three gears, but just ticks over at legal highway speed due to the high fourth gear. At highway speed it is as smooth as a four. Handling is excellent. The steering is not heavy at low speed and it is beautifully solid out on the highway. It can be ridden “no hands” with ease at anything over 30k.

Michael’s sporty was ridden 2200km to him in Queensland from Adelaide with a big load of luggage. It behaved perfectly. Only problems were a kill switch which failed and the original speedo drive needed replacing… not bad for a 25 year old bike that hadn’t run for 10 years and only had 300k’s on the clock since a rebuild.