CA members' and friends' choppers... Discuss and show off your chopper here. Send your photos and description to our email address

Got a call from Con the other day about a shovel "EasyRider lookalike" he'd just purchased. As it turned out, I was heading into the city on my shovel and arranged to catch up... 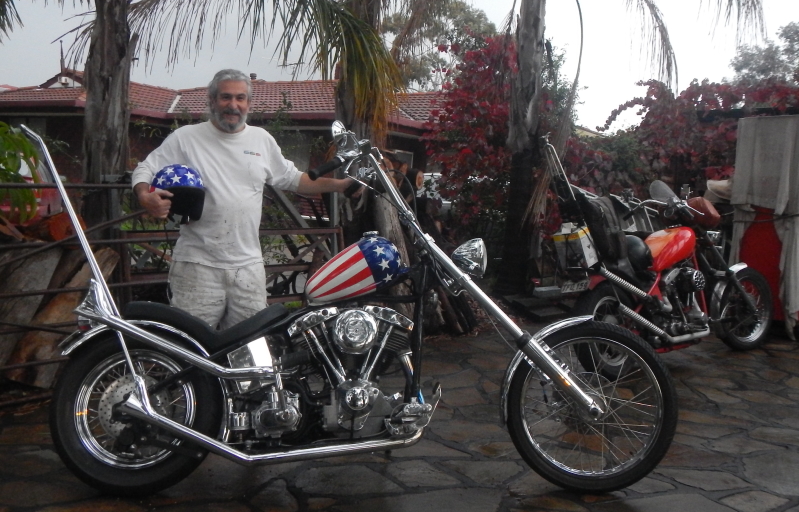 Chopper was for sale in K&M a few years back, purchased and then resold to Con.

Genuine wishbone frame but with sidecar lugs cut off. 73 shovel motor in place of a panhead and raked triple trees rather than the heavy rake the movie bike had. Quite a few other differences, which Con wants to rectify over time.

A replica of Fonda's chopper might not be everyone's cup of tea, but the movie and the bike had a tremendous inpact on my generation and they are largely responsible for our love of choppers.

I spent the day cruising wet streets with ominous black clouds around, but only rode in rain for 15 minutes. Quite heavy rain an hour after this as I was leaving... but... heck all wrapped up in water proofs I stay cosy and warm. Any chance to ride my chopper is most desirable and rain doesn't bother me, but night time in the city requires extra concentration as those white lines sort of disappear in the glare of oncoming headlights!

Dropped in on Victor after this and had a look at his chopper for which he has built a new frame, sissy bar, forwards... well almost everything except wheels, motor and gearbox(no photos allowed... damn)! Then a most enjoyable ride home again on wet roads but only a bit of drizzle near home. Great to be out on the chopper and spend time with a couple of chopper enthusiasts and good friends.
Chopit'nrideit... Prof
Top

Wow, love the bike. I'm one of those people that does not need things to be an exact recreation to make it to be considered great, you could say I'm not a traditionalist. If you like something old and you want it to look similar but with your own twist that is good enough for me, I may like it and I may not, it doesn't matter as long as the owner is happy with it. I really dislike people that tell you if it's not 100% correct replica it's no good, whatever it is eg. bike, car, house, furniture or anything else that people trying to recreate. Now I understand that some people are traditionalists and they want and even need things to be an exact copy for them to be happy and I'm OK with that as long as the owner is happy with it. I just don't like it when they rubbish other peoples things because their thing only resembles the original.
I personally love the bike the way it is and I know what it is sup-post to be and that would be good enough for me. Now I'm not saying that Con should not change things on the bike but he should not change them to please traditionalist only to please himself.
Sorry for my whinge I needed to get this off my chest for a while now as I know there are some traditionalist on this web page and they will tell you that your bike is not a chopper because you have not done this and that, I'm sick and tired of hearing it.
Sorry once again, I do not want to Hijack the thread and I LOVE THE BIKE.

That's an awesome looking rigid chop. The owner looks very happy. It doesn't need to be a certain way - it's a chopper - and I don't see anything that needs changing; Well, if it were mine, I'd be tempted to throw on a springer or girder front end...but that's just me.
Top
Post Reply
4 posts • Page 1 of 1

Return to “Your Chopper Pics”