Not quite started yet but I've got a good idea

Thanks for the advice

After a few wild ideas that were thankfully identified as being as ridiculous I have done some more research on what i should do with the old GS.

Remember a picture is worth a thousand words...

What do you think?
Remember old bikes were once new bikes
Top

The reason I use a standard frame is because it has rego numbers and if you don't mess them up.....
You don't have to get the bike re-inspected here in California....

pommychopper wrote:This is a standard frame, hardtailed, nicely done and a good line
I'm not sure why someone would hardtail and goose neck a standard frame but it's nice anyway!!

That one looks good Keith but Peter told me he's thinking of bobber style.
If you can't handle that stuff yourself or know anyone than here's an address of a guy in Adelaide who does frame repair /mods.

Name's 'Snowy' and he majors in restoring to life pranged insurance rite offs. Nearing retirement and does'nt really like non stock bikes but was a big help in doing my frame. Price was good too.

Be advised that its been a few years since and I'm not sure if he's still going.
ramjet wannabee
Top

The minister of Finance says no to major mods

Well as I'm sure a lot of you have experienced, the Minister of War and Finance has decided my grandiose plans for frame mods have been placed on a permanent hold.
This is where I'm at now, All I need to do (read allowed to do) is modify the seat rails and the top of the shock points.
The date for completion has now been pushed forward to 31st October so we'll see how we'll go.

On a bright note, the experiment of getting a rear wheel from the states seems to have worked, the shaft seems to marry up to the new wheel and when I engage a gear it seems to lock in a gear at the rear wheel.

PeterGS, glad to see your bike comin along. Is that wheel you got from the states a Suzuki Intruder wheel? out of curiosity how much did an item like that cost t6o get here. Ive bought smaller items from the US and costs vary greatly enough that ive been reluctant in purchasing bigger items.

Here are some pics of the progress acheived last Saturday. I promised Pete I'd get some photos up and I've gotten a bit carried away and will give you the story as it unfolded...

Pete and Greg arrived with the bike in the trailer late Saturday morning, had a cuppa and then unloaded the 850 and rolled it into the workshop... 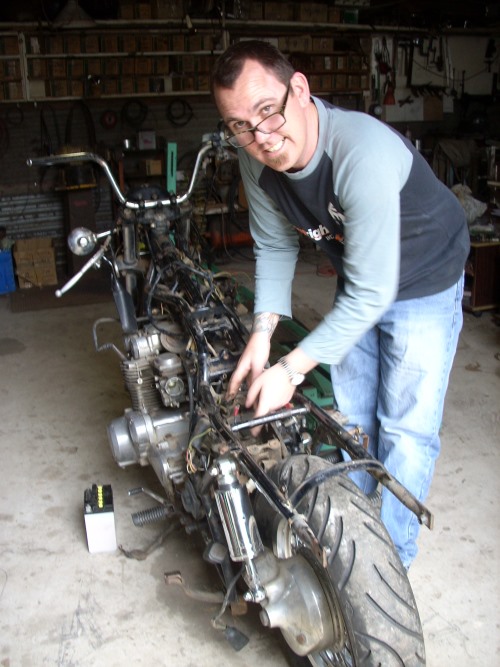 First step was to unbolt electrics. A fair bit of discussion followed over exactly what he wanted. For the sake of economy, a battery/electrics box was decided against in favour of some fibre glass side covers by Tim. 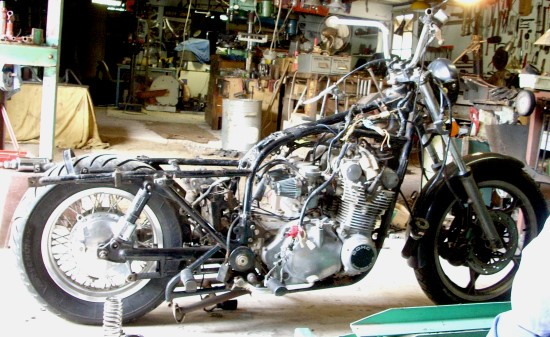 Next bit of discussion revolved around the shockers and height off the ground. We could not figure out the strange new things he supplied as they had no give whatsoever and could not be pulled apart...

Main issue being of course that before we could modify the fame and build the shocker and guard mounts, we had to know the limit of upward wheel travel.

I finally convinced Pete to settle for setting it up to suit 10" Harley shockers as I had a set we could use as a guide.

(Another Peter rolled up later in the day and made me feel pretty stupid by telling us they were softail shockers which stretch under load... I have a worn out set hanging out back!!!)
The bike resting on a collapsed 10" shocker... Once up on the stand and with the rame removed, a jack will holds the bike to the level Pete is happy with. I provides sufficient ground clearance on full compression and doesn't jam the shaft drive universal joint. 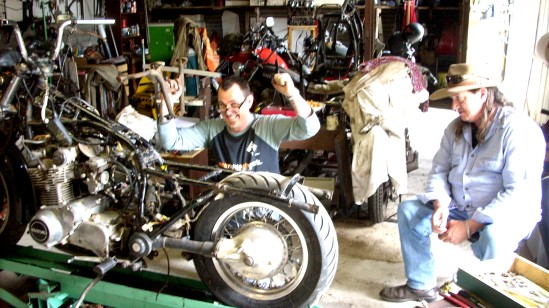 Footpeg/exhaust mounts are off and here Pete triumphantly holds the centre stand aloft! The ever patient Greg looking on... 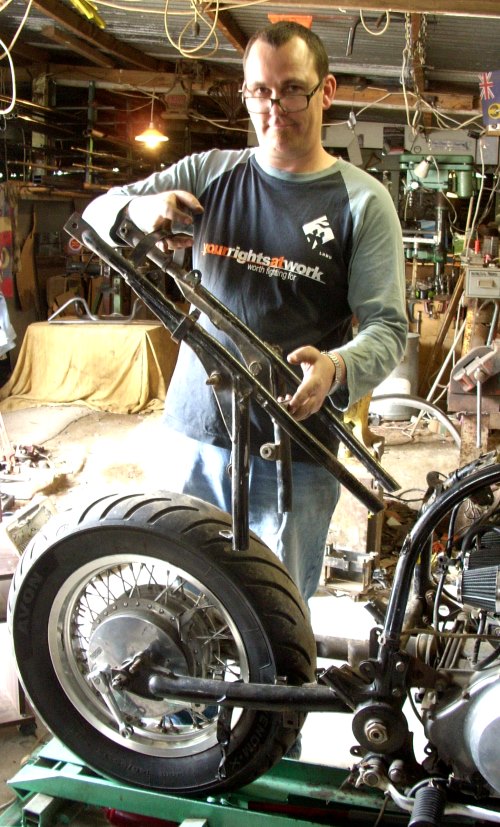 Next to go is the rear sub frame. NO turning back now mate! 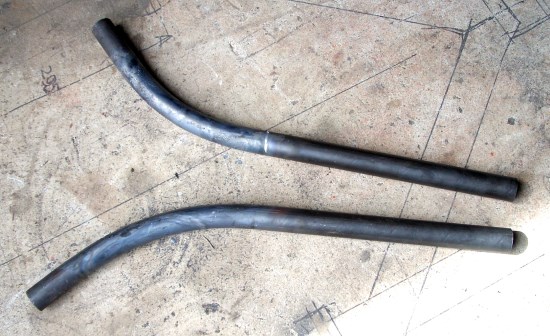 Rear tubes made out of 28mm DOM tube (all i can get in 2mm wall thickness and $28 per metre including freight from Melburne!
Tubing has been bent using heat from the oxy... Time consuming and a challenge to get both sides matching. My next job is to build a tube roller. 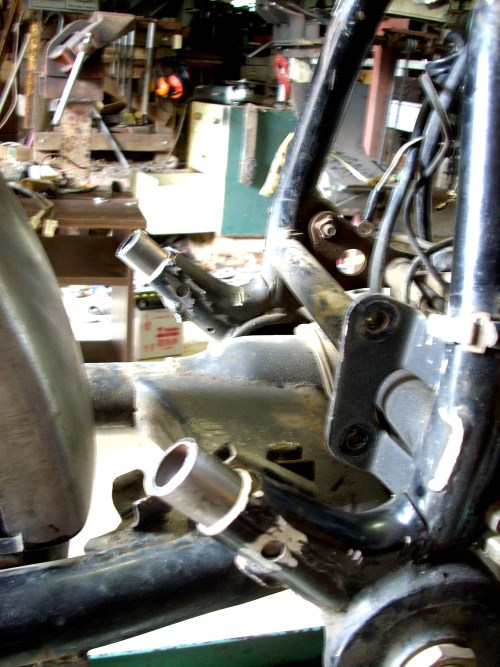 Slugs made from tube slitted and squeezed to fit firmly inside fame tubes. Note the holes on both sides of teh frame for plug welding... prevents any movement of the slug. 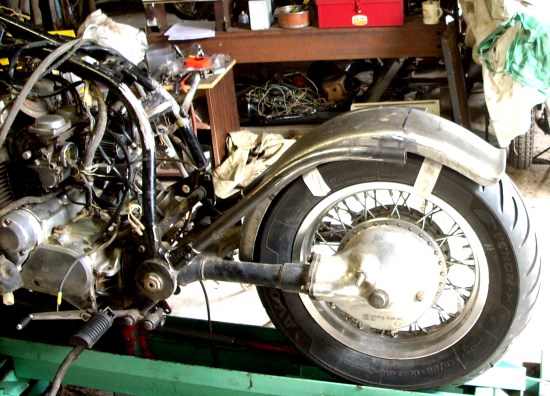 Frame tubes sitting in place while we modify the guard. It was a new one, with about 10" cut off and the sides have been wedged and rewelded tto follow the line of the tyre on full compression. 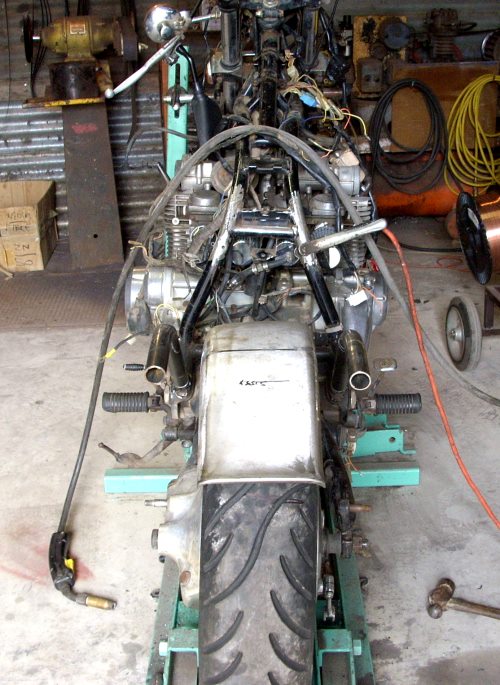 Rear view of the guard and tubes. Because off the wheel's offset (shaft drive)it took a bit time to find a happy medium so it will look ok when finished. 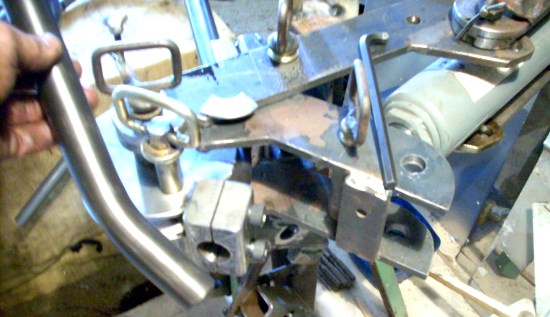 Bending seat rails. One is done and the other is in the newly built bender. Bender works great and bars I've made with it come out beautifully. 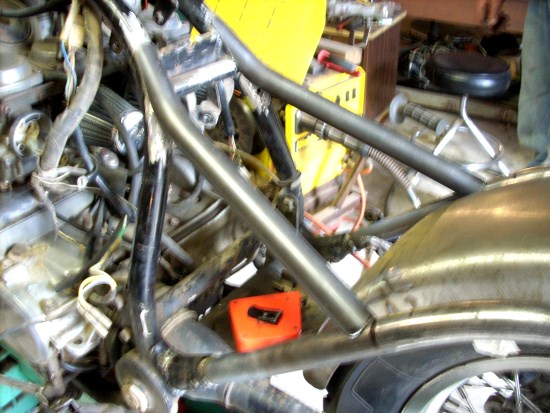 Seat rails being fitted. We wanted to get a smooth line from the twin under tank rails back, which has been achieved. There will be a neat little area (top left) in front of the seat for tell tales. 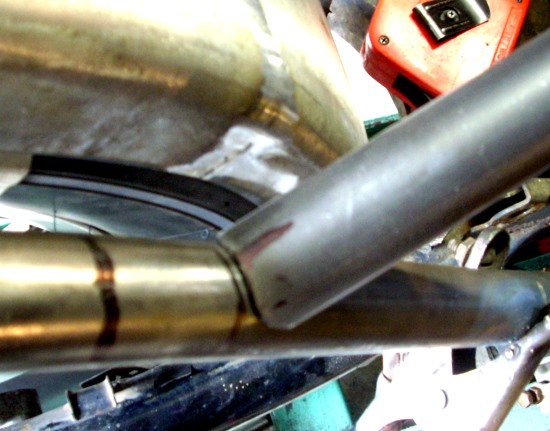 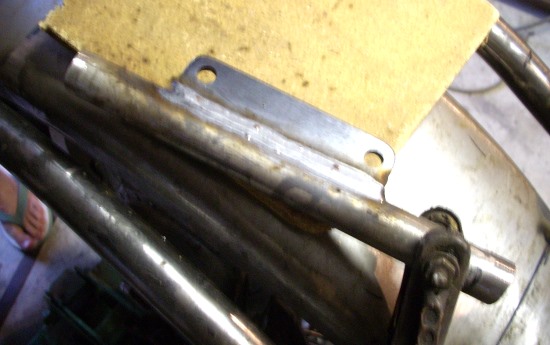 Forward guard mount also ties the upper frame together. 5mm flat bar is curnved to match the guard's slight curve from side to side. 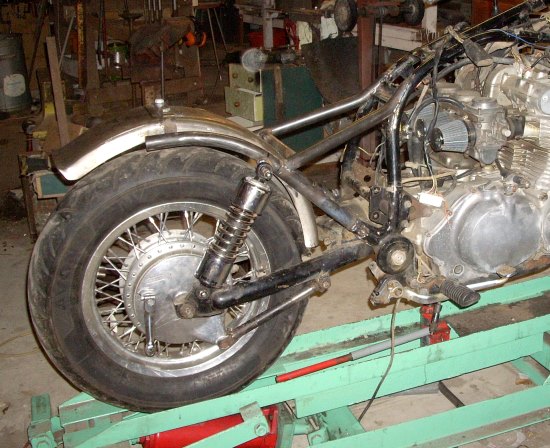 A lot to see here as time was getting on and a couple of progress pictures got forgotten.

Top shocker mounts have been welded in and sho9cker reassembled. Original mounts were cut out of the discarded sub frame and have a curve cut and ground into them to fit neatly into the round frame tubes.

Rear guard mount has been made and welded in.

Rear brake is now a drum instead of a disc. Brake anchor has been modified to now fits underneath swing arm instead of on top. Brake lever originally pointed upwards... but just a case of removing it and relocating it downwards so cable/rod is less conspicuous and will actually work with little modification of the original brake lever. Pete will use a rod initially, but go to a cable when he moves his controls forward, so we have set it up for a minimum of reworking later on. 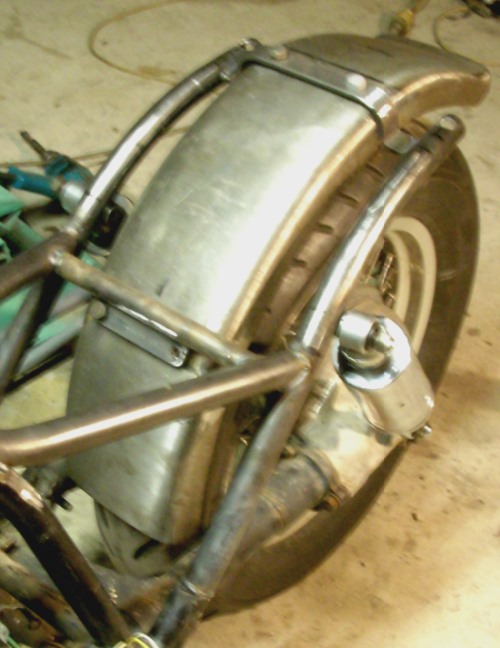 Another view of our work. Seat rails are also 28mm instead of the original 19mm. Guard mounting can be clearly seen. Frame is strongly tacked and will be final welded when Pete has finished all his mods and had it sand blasted. 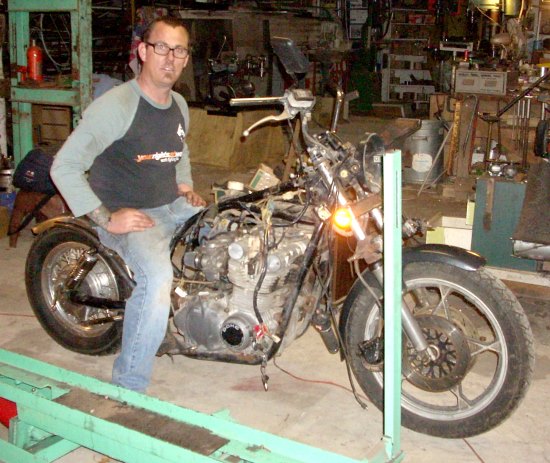 The happy rider. We went in for supper at this point and then put on a pair of Z bars which finished it off nicely... You'll have to wait for a pic of them... but they do look very cool. 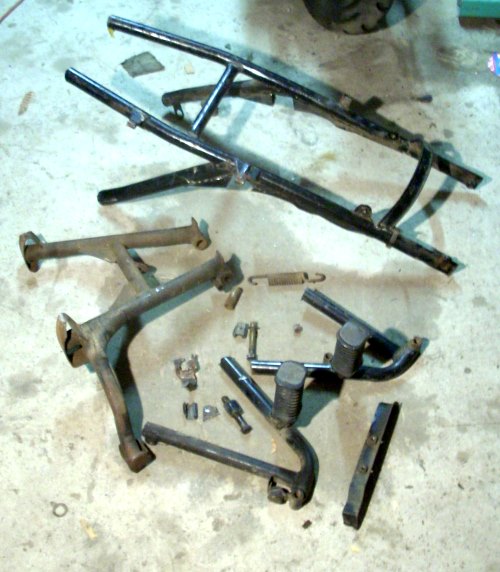 What we don't need any more.... well it's being chopped aint it!!!!
Chopit'nrideit... Prof
Top

Pete that looks good, I can't wait to see the end product, keep up the good work.

Trees and bikes are alike...
You can CHOP EM!!
Top

It looks like you have put a lot of effort into that mate.
Must feel good to be able to do that sort of stuff yourself.
One day I will learn to weld and stop being a useless fat b@st@rd slowing down PC's progress.
As Cromag said, keep the pics coming.
Harleys SUCK - Real men ride Yamaha's - FAST
Top

Great effort by all. Progress pics are fantastic for us who dont read good.

Looks cool.
The brave may not live long, but, the cautious do not live at all.
Top

What ya doin' for a tank?
Top

A few more picks after a couple more brackets removed

Today after doing the household chores I decided to cut a few brackets off the bike to see how the tank fitted.

All I had to do was chop off the coil brackets (coils being relocated to the horn brackets at front of bike) once I had done this the sporty tank seemed to fit fairly well, just have to locate and drill holes (insert crush tubes in frame) and add bolts to hold in place.

Had another look at the rear of the bike and was thinking that the left had side is about 2cm out, this we can fix once the frame is stripped and done whilst we cleaned the welds up.

As a last note, I reckon that I'll be using 10" struts at the rear (made out of the same diameter tubing as rear frame to keep it looking uniform) until I can wrangle up some 10" sportster shocks
Remember old bikes were once new bikes
Top

Playing around with a jockey shift

Tis the season to be jolly..... so after eating enough for a small African village I decided to get into the garage and play with a few ideas before i get to getting the engine out ready for final welding.
I've always liked the look of a jockey shift with a hand clutch, so after finding a bit of 15mm pvc out the back I thought I'd give it a go to see how it looked.
I sacrificed my gear lever to see how it goes, I cut the end off and bent the gear shift lever enough to slip the pvc over the top.
As a mock up it works well but I will need to do some heating of the pvc (once I dig up a heat gun, I think my father in law has one...) and get the shaping right.
One thing I reckon I'll do is use a smaller pit bike clutch lever instead of a standard bike lever, just for the size and aesthetics.
In addition to that I'd say with highyway pegs (and a forward control for the brake it should look even better)
I'm up for suggestions so let me know what you think

That mod is pointless, low rent and dangerous. You'll only have one hand on the bars during the entire clutch and gear change process. In addition, the lever will become so heavy that unplanned gear changes will be a possibility every time you go over a bump.

With Suzuki's it's a piece of cake to fabricate a hydraulic foot clutch using 2 brake master cylinders. Use the 2nd MC as a slave cylinder and mount it on the frame on the right side with a rod to the actuating lever.
Don't let your luggage define your travels.
Top
Post Reply
32 posts