Quick 411. I've been building custom cars for my mates and I on and off nearly 10 years, which mostly included engine swaps, complete suspension builds & Airbag suspension installs, paint and panel work like shaving, body drops etc, chassis redesigns and the list goes on. Since I started a family I sold all my cars off and I'm back where I began.
Bike crazy! I race Enduro and MX. This bike will be a daily dragger to get to work on.

I've been on the hunt for a bike for a good base for a bobber.
Ended up with this 91 Yamaha XV1100. Got it for a great price. Everything works and it runs smooth. The motors are super reliable and parts are by the plenty for these. So to me that was a good choice for a first.

I did want something older, but the models that are commonly used for bobbers are pretty rare here, not to mention expensive!

Here it is. With its "pretty boy blue" paint.

Lower it via shorter shocks and fork springs or relocate the mounts. (gotta keep the shocks, roads are terrible out here)
Drag Bars
Springer seat/Or bucket style seat that hugs the frame
6in Rolled Sheet metal rear bob fender, or I'll customize the rear fender. Loose the front fender.
Gloss Black the wheels, satin black mostly everything else
Matt Black engine with some raw high lights
I might do something with the headers like a right side exit on the rear pipe. I'll have to move the fuel pump.

Fast forward... Since it Now has rego..

I'll unpick the upper rear shock mounting points and move them up to drop the rear.

I've decided to go with the stock rear fender. With a fair bit of massaging and panel work I'll get it looking the way I want.

Between the tape lines = Sectioning! I'll cut the middle section out, join it again. And plug all the old mounting holes up and smooth it over again.

Dropped the ride height about 60mm from a reference point on the engine.
The mount was moved up 45mm from the standard position on the frame. The shocks I have on order are 10mm shorter (290mm) than the standard shocks I'm using here (300mm). So it should lower that hair more.
The stock shocks are shot. Shafts are pitted and leaking.
If I want to go lower, I'll fab up some rigid struts to really slam it for "smooth" road rides. Here in Central Qld the roads suck so shocks are staying in for commuting.

Pipe ends rolled over and all smoothed up with the die grinder sanding disk. Ready for paint. Won't even know its been moved.

Next is the fork. Should make a big difference in the stance. Should look more level.

Mounts all painted up. Hope to get some work done on the rear fender soon.
Custom , one blade at a time.

Lowering makes a big difference... If I am redoing rear suspension mounts I set them up for HD shockers as you can get them in 3 different lengths and they will always be available... I use sportyones for the lighter jap bikes. 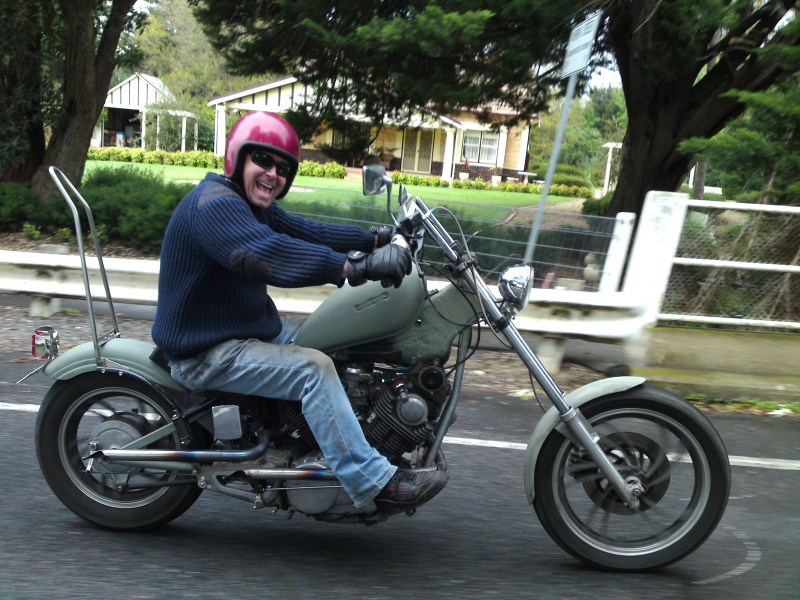 Prof wrote:Lowering makes a big difference... If I am redoing rear suspension mounts I set them up for HD shockers as you can get them in 3 different lengths and they will always be available... I use sportyones for the lighter jap bikes.

Yet to do the front end. I'll drop it 2inch in the front and slip it up the clamps 1inch and see how that goes. I'll order a new bush and seal kit for the forks for when I bust them open so they are fresh.

As for the shocks I have a set of 290mm ones ordered. Standard are 300mm. So its a tad shorter along with the 2inch lifted mounts. The roads are terrible out here so I'm retaining a bit of travel. I have some old stainless 4 link bars from a rod I'll make into rigid struts for "smoother road" cruises if I get out to the coast road. Inland roads are full of pot holes and are like riding on a rough ocean.

Got a bit more down. Ran out of days off. Back to the work grind for me.

Section cut out and tacked.

Bit of a mock fit. (It will hug closer to the tyre once I made the fender struts and brackets

I'll cut a new wheel arch something similar to the tape line, to follow the chicken strip of the tyre more or less. Its just balancing on a hammer on the tyre for a mock up so nothing is lining up.

Welds all smoothed over. Just have to plug up the holes and a couple other bits and pieces on it. Then it will be ready for prime and paint!

Kleaver
Custom , one blade at a time.

yep you can do lots to improve the looks of the 1100 and it seems your on the way .std they look like some one jumped in the middle and never recovered just stayed bent
IM NOT CRAZY ITS JUST OTHER PEOPLES PERCEPTION OF MY NORMALITY THAT DIFFERS
Top

Is it just me or is this one of the few bikes where you can raise the top mount of the rear shock (i.e. have a more vertical shock) to lower the rear? What a bonus to be able to improve the action of a shock & gain an appearance advantge! Sounds like a distinct advantage for the roads you've described. Looks like you've got this thing sorted- can't wait to see the 'after' pics.
'94 Dyna Convertible
'73 TR6 Tiger - chopper under construction
'71 T140v Bonneville
Top

tigerbob wrote:Is it just me or is this one of the few bikes where you can raise the top mount of the rear shock (i.e. have a more vertical shock) to lower the rear? What a bonus to be able to improve the action of a shock & gain an appearance advantge! Sounds like a distinct advantage for the roads you've described. Looks like you've got this thing sorted- can't wait to see the 'after' pics.

You're dead right. Re-locating the upper mounts higher and Standing the shocks more upright. Also lowers the bike but stiffens up the shocks action also decreases its range of travel. Which is needed when you lower anything. Having the shocks on angle works as a mechanical advantage or hinge point. Where "X" amount of shock travel can be used over a larger "X" amount of swingarm travel. We lay shocks on a angle when car suspensions have a large range of travel. Especially vehicles with airbag/hydraulic setups that lay on the road.


xsive wrote:yep you can do lots to improve the looks of the 1100 and it seems your on the way .std they look like some one jumped in the middle and never recovered just stayed bent

I'm working on it. The fuel tank so far I'm undecided on. I'm not 100% sold on the angle it sits. Like you said looks like something heft has parked it right in the middle. Tank sits on a high angle. These things also have stupidly wide boxed out back bones that are part of the induction piping the the carburetors. My other option is to go a FX/FL 2 piece "Fat Bob" Harley Tank. The will enable me to mount them where ever I want. Should get it a better look. Not sure yet.
Custom , one blade at a time.

Check out what we did on Dylan's bike... ran direct filters and cut out all the bulges in the top frame member... allowed us to use a yammie trail bike tank.

If I was building one, I'd remove the whole top frame member and run a one inch frame under motor to a lower and more forward steering head... didnt do it on the last two bikes because they didn't have the extra money to spend... but doing it for your self, the time is not so much of a factor.
Chopit'nrideit... Prof
Top

Cheers Prof. I've decided to run with the stock tank for now, I've got a few things in mind.

But yes if I were to do it, I'd cut it out and run a 1inch cross member top and bottom. Maybe get lazer cut gusset to run in between the two.
I've got to get it somewhat ridable soon. Its going to be my daily commute to work.

More updates to come. Going to have another hack at it on sunday.
Custom , one blade at a time.

Bit of busy day yesterday. That stock rear guard is all sorts of different now. All the holes shaved up. The old mounting dents/mould were cut out and new pieces welded in. Wheel arch re cut. All smoothed over.

I kept 2, 8mm threaded holes there right at the base. Then welded some brackets to the swing arm, so it utilizes the existing (old) mounting points on the guard.
I just have to make some struts from the fender to the lower shock mount on the swing arm. I have some 10mm round bar, I'll have a radius bend on it, also some small indicator brackets tucked in up the top.

Changed the look and stance a fair bit. Starting to look like something now.

Sorry for the bad phone pic. By that hour of fiddling round I was over it.. I'll get a bit more done today hopefully.
Custom , one blade at a time.

Rear fender done... Glad that part is over. I've never done one before. It turned out pretty damn good.

6mm round bar for ribs, I also cut little slots every 60mm for cable ties to slip under for tail light/indicator wiring.

I shaved out some old mounting pressed "humps". Also I left 2 mounting points at the front of the fender. Used them to mount on the swing arm. Looks ugly at the moment. Bit of filler and a prime. It'll be sweet and smooth.

Some 10mm round bar, radius bent. 2 brackets to the lower shock mounts.

The existing mounts, with tabs welded on the swing arm.

I had my doubts. But I'm quite stoked with my efforts. My visualization of the project is unfolding well.

Thanks all. Back to work tomorrow.
Custom , one blade at a time.

Built some pipes. Rear cylinder pipe exits on the right now, rear pipe also has a baffle inserted to up the back pressure due to the front pipe being longer.

All wrapped up!
Custom , one blade at a time.

getting some good stuff happening with your bike now good shaping on the gaurd allthough id like it a little longer . pipes wrap the engine well . keep it going looking good
IM NOT CRAZY ITS JUST OTHER PEOPLES PERCEPTION OF MY NORMALITY THAT DIFFERS
Top

Have to agree mate you are definenatly making a cool ride out of a bike that does,nt really look right as a stock ride, enjoying seeing on what your doing mate.
friends welcome family by appiontment only.
Top

Slowly bolting it back together.. New seat to be mounted next.

Custom , one blade at a time.