Hey folks, just picked up my first HD, I've been waiting a while to find one and ended up coming across this one by luck. It's a 1974 FX1200, which means we have mid-foot controls and the 35mm Narrowglide front end. Somebody has fitted 3.5 gallon fatbob tanks, which Is fine with me because that's what I wanted to run.

It needs a good tidy up, a bunch of new parts and a serious tune but that is perfect for me. The bike hadn't been ridden for 10 years but rode it the 11km home on a trade plate. About half way home it started running rough, missing all the time and spluttering and backfiring, but I did make it to my destination in the end!

As you can see it has a slight rake and the frame is fully molded. The bike is kick only.

I have quite a few plans for it, first of all is to get it registered and running nicely and replace the important parts that are stuffed (fuel lines, tyres). I've been collecting old chopper parts for the last few years and have a good stash ready to go on this machine.

Pretty standard chopper kit going onto this one; open belt primary, foot clutch and jockey shift, extended forks, 21" front and 16" rear with some vintage tyres, and of course a huge sissy bar and king and queen seat. I'm going to make some funky exhausts too.

Good stuff Glenn, she'll be a pretty cool ride when finished if I know you!
Chopit'nrideit... Prof
Top

Well I was hoping to report that the bike is on the road and riding well.... Not quite, Ive found a few things that have needed doing before hand. I had to wire up the horn and a high-beam indicator, when I started fiddling with the wiring I found out that there were no breakers or fuses in the whole system. Somebody had been in there previously and really F'd things up in the wiring department, so I ripped it all out and F'd it up again in my own style. The dashboard is now gone and nothing on the bars, simple wiring throughout with separate fused wiring runs for ignition and lights (Yes the brake light comes on with ignition...

Next on the agenda was the rear brake. I had done some test riding and the rear brake was almost nonexistant. Prof and I were having a look see as to why and it turned out the rear disc was cone shaped. Prof had a spare that I got from him and we sanded down the brake pads flat again, as they had worn to the shape of the previous disc. Lets try the brakes now.... Hmmm definately an improvement, but still pretty awful, I almost took out one of our veranda posts.

Intending just to bleed the system with fresh fluid, I pulled off the cap from the stock Lockheed-Wagner master cylinder, and was greeted by a MC full of rusty liquid of some kind. Bugger. After pulling the MC out and dissasembling it, I wrote it off and had to come up with another plan. Repop master cylinders are freely available online, but I dont wanna wait, I gotta get this thing done, so the only thing left is to improvise.

I had a spare Tokico master cylinder from a Kawasaki KZ1100, had some brain waves and got fabricating.... Here is the result.

Bracket made from 6mm steel, testing for fit.

Spare hose I had too short...

Bracket bolts up with stock exhaust mount. Reservoir mounted temporarily for now, It will be unnoticeable once its modified and mounted properly.

I can't comment how well it works, I need to get a new brake hose made up tomorrow, but once that is done I'll be about $25 (cost of hose) and a few hours into this... Beats waiting 1-2 weeks for a part to come from USA and sitting on me bum until then.....
Top

A couple of other options Glenn... go to bike wreckers and pick up a bit longer one... you should have plenty of choice or to get you out of trouble... cut the metal line and extend it. Bronze weld the two joins. I once got myself out of trouble by cutting the rubber line and putting in a piece of metal brake tube I grabbed off a car wreck in a backyard. Belled the ends and a pair of hose clamps each end and it got me where I was going...
Chopit'nrideit... Prof
Top

Brake lines aint something I muck around with, for the minimal cost of getting them made up to your specifications while you wait, it's not even worth the effort.

I'll report back on the brake tomorrow afternoon, as well as some words on carburetors
Top

WOW over a month since an update.... I started a new job and don't get much time in the shed or on here... But the bike has had quite a bit of progress since I last posted here.

Some of you may have seen the on the road pics from Andrew, This bike has been treating me well and I've put on some decent miles already.

Bike now has 8" over fork tubes, and a 21" drum brake front wheel, using a Japanese hub. Spent the day down at the Chopper Shed doing bits and pieces to get it all to work. Prof and I turned up the axle, and also had to machine down the hub and brakeplate to fit between the fork legs. To anchor the brake plate, a block of aluminium was welded onto the fork leg after some carefull measuring to see just what sort of wall thickness there was there. Ended up being 7mm thick - plenty of strength for the weld, but more importantly not distort while being welded. Also machined up this stainless cable spacer, which allows a stock Harley clutch cable to be used without modification. The brake works well and actually works better than the front disc ever did, Even after I worked on that and got it working OK)

Some other bits that have happened, I made some narrow pullback bars which are the best for the open road, but a bit of a bear for maneuvering through heavy traffic. I got these apes, cut a few inches out of the centre and the mounted em up using a HD 1 piece clamp. The bars are still too wide for my liking but it's above usual car mirror height... But wheres my clutch lever gone???!!

Here's the rest of the business. I cut and extended the stock clutch release arm to the length they need to be for a foot clutch, and then instead of fabricating a linkage I used a stock clutch cable cut down, with a cable clamp on the clutch pedal end. BDL 1.5" belt drive, stock clutch and pressure plate. Fabricated the shifter arm using the original ratchet top part, finished off with an old toyota gearknob on top. Because of no inner primary you still need to support the tranny mainshaft, for those not familiar with the 4 speed, the cast plate behind the clutch hub has a bearing in the middle of it and does the job.

Whipped up some forward controls with some old Drag Specialties pegs, and butchered Prof's old Shovelhead forward controls to make my clutch and brake pedals. All easily taken apart to be cleaned/greased etc.

Brake side is very simple, Once the massive FX rear brake pedal setup is out the way everything looks much nicer, Especially after removing half of the oil lines that once went to the primary. I used the orignal master cylinder pushrod cut and extended all the way to the front. Requires some careful bends to clear the frame, forward control tab and the front exhaust, and has to have enough clear space around to actually work without hitting anything. I used an old Honda brake light switch for now, it is temporary but will probably stay on there.... Couple of cable ties to the frame and the pulling spring around the MC pushrod with a hoseclamp.

When I get a chance I need to cut and reweld the brake pedal so it is more upright, but it works fine for now.

For now everything is mostly good, Bike is starting easy and riding well, engine hasn't shown any issues yet so It's proving to have been a very good buy. Bike was leaking heaps from the Primary while sitting, Now that is all eliminated but the motor is sumping and dumps oil out the breather at startup, so I need to investigate my oil pump check-ball.
Top

Looking good Victor... thought you might have been up to no good...

Next Sunday some of us are going for a ride down to CApe Jervois and Victor Harbor... a young new member is joining us. Hope you and Will can join us and show us your new girl (HD that is).

A couple of pics to add to those above...
Victor milling the brake plate... 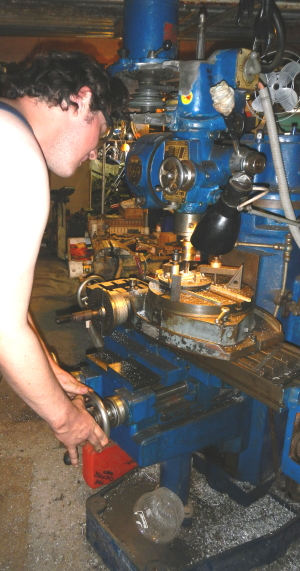 Filling up on the way home after setting up his super cool front 21 incherl... 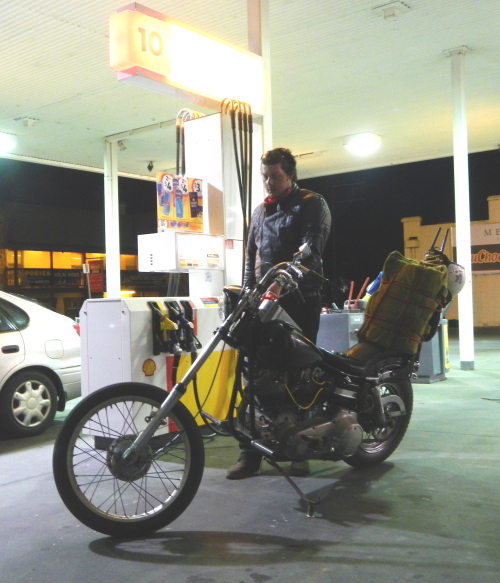