Don't ever say you can't afford to build a chopper!!! This thread will prove you wrong
Post Reply
15 posts • Page 1 of 1

Well here it is. Very ratty GS400LT DOHC Suzuki... but the owner said they had it running and compression is very good. Kevin and Steve getting it off so I can take a pic...

Why??? I wanted something I could afford. It had to be simple, narrow profile and light but still with enough power to go on our chopper runs and be used comfortably on medium trips one or two up... 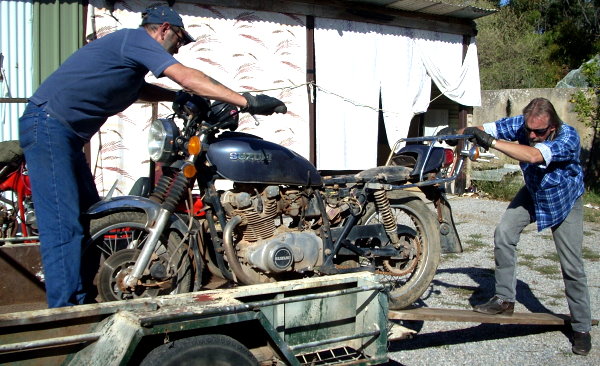 Front brake doesn't work, no mufflers and seat had it and rear guard and taillight assembly just about fallen off... but who cares!.. we don't want those things anyway! 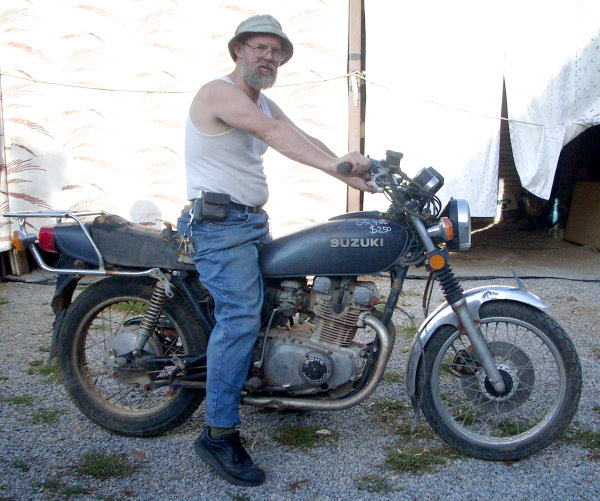 What is the purpose of this project?

I often hear it said... "I can't afford a chopper." "I don't have the tools or knowledge to build one."

Well that ain't true and here I'm going to show the unconvinced how to go about it early 1970's style...

This bike is not currently rideable... but a day would probably have it on the road as is.

Often young lads in the 70's would buy a bike to get to work or trade school, and chop it progressively in between using it as their only transport. An apprentice hardly got enough to live on, so his first chopper was a budget job, moslty done by himself, with the help of mates and the occasional shop.

So we will treat this project initially as though weekends are the only time we can work on it.

I'll also be a bit critical of some of the modern approaches to chopper building and chopper accessories as a way of emphasising what we were about... no offence intended as you should build what you like... BUT this is about an early seventies budget approach...

So we turned our stocker into a chopper as quick as we could.

What in essence is a chopper?

1. Seating position is lowered with a thin seat, by lowering the seat rails and struts or shortened shockers and when we can afford it, a 5"x16" back wheel (couple of inches smaller diameter than the standard 4x1),

3. Front end get jacked up by 21" front wheel (not so common in Oz in early 70's cos they were not common on trial bikes) or 4" or 6" slugs to extend the fork tubes. We couldn't usually afford to rake the neck initially. That often came on our next chopper or once we had everything worked out.

4. Hand grips are raised with ape hangers, T bars or Z bars so we can sit up straight and look at everyone envying us... and check out the chicks with out hurting our neck! Bars are also a quick way to make our bike stand out as NON stock. Seventies bars were all narrow so we could slip between cars, ride over foot bridges and down walking lanes if need be... not these wide 90's monstrosities!

5. Choppers are all about the motor, so the stock tank gets trashed and replaced with a smaller one or gets raised,

6. Rear guard gets bobbed and a small tail light goes on... the cut off look is another essential chopper part. [Just as an aside, the Harley bobtail fender was made by the HD factory aAFTER the chopper craze was mature as a copy of Ness's Digger's... straight line solo rocket sleds and isn't old school or 70's classic chopper at all!]

7. Because it's our only transport, we attach a sissy bar to tie our lunch, spare parts we collect, sleeping bag, box of beer etc... and so the girls don't fall off the back... and also they want to come again and again!

Well that's CHOPPING seventies style mate! Didn't use an axe like in the next pic and 4" and 5"angle grinders didn't exist so it was the humble hackwaw and cold chisel 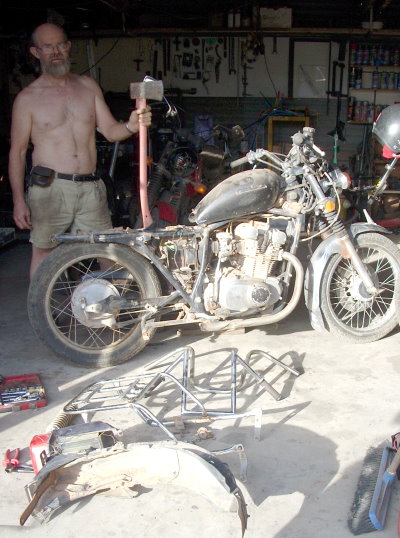 So what did the average lad do when he got his bike home or the bug hit him?

He wheeled the bike out onto the drive (Dad's car was in the shed!) snipped the indicator wires and unbolted the indicators and ripped off the side covers. He pulled off the shockers and stuck a block of wood between wheel and guard, pulled off the thick seat. He then sat on the now lowered bike and held up a pair of high bars. Well by the great Purple People Eater! My feet now touch the ground! 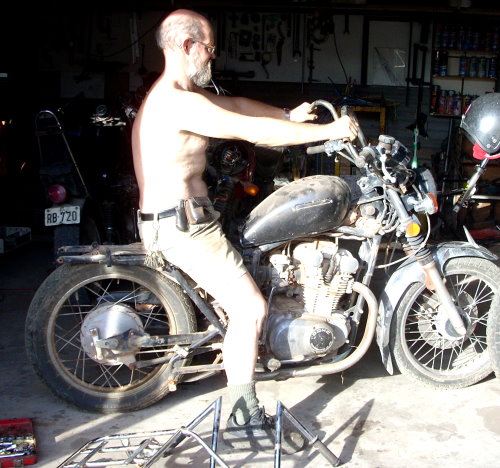 That's enough for tonight. This post will be done in fits and starts as I have stacks to do at the moment.

So to restate, my aim is to show you how you can, with few dollars and not a lot of skills, chop a bike a bit at a time...

Hope you get some encouragement, learn a few things or at least get some amusement from this Suzuki chopping exercise.

Aim is to have a nice neat light little chopper that interstaters can ride when they come over and the occasional enthusiastic non rider can learn to ride on and hopefully become a chopper fanatic too!!!!!
Last edited by Prof on Fri Jun 20, 2008 11:40 pm, edited 1 time in total.
Chopit'nrideit... Prof
Top

Well know, i saw one some time ago, he'd taken the pivot bolt out of the swingarm, welded some tabs to the bottom of the rear frame cradel (i think a piece of tube goes across there to hold the centre stand/Whats a centre stand says Prof)..then he makes some struts from top shock mount to standard swingarm shock mounts (at just the right length) and WALLA...( I Mean, Whalla!) one rigid frame.
Top

Hey whaddyaknow i found a pic of it over at GS Resouces . com

its actually a 550 and the swingarm is mounted to the rear peg hangers....whaddya think, a little bit of beefing up, it could be OK.

Love the idea, Prof. Planning the same with the CX, ride it as long as possible, but, chop it at the same time. Big ideas...small budget.

We shall prevail.
The brave may not live long, but, the cautious do not live at all.
Top

Good on ya Prof's .....it boils down to ..motivation and imagination ..sure i like own a brand spank'in new bike , but with climbing intrest rates and a mortage and 'er in door's , i got buckly's , and like the Prof's is about to prove you need to go back ... way back ... and if the donor bike is japaneasy ... so what ... it's the final out come that count's .... i would love to have the skill's of Pommychopper or the Finkstr and build a scooter totaly from scratch , but that dose'nt stop me from building from an excixting bike .... and a Suzuki GS400 will make a bloom'in kool bobber

lookin forward to the build....

Thanks for the encouragement fellas. I'll want to show how to get it to look like a chop with out major cutting and welding and then chop it a bit more and then do the final version with rake and extension and single top tube instead of three tube set up. will also do struts as well as shortened shockers. Means I'll be redoing work, but aim is to show how ANYONE can have a chop that others will appreciate...

I think I will keep the swing arm so if a guy comes over with his wife/partner she can comfortably go on the back with him... but I will lengthen it in a way I've not seen before but reckon is the simplest way.

Anyway... will see how we go. Final colour may be yellow and orange with some old simple 60's 70's embellishment ideas.
Chopit'nrideit... Prof
Top

Sorry TBear. Rilda came up so I got her to take a pic before she excaped. No time to find a shirt and it will soon be winter!
Chopit'nrideit... Prof
Top

I bought a manual for it yesterday... $70! That's an essential part of any new bike project. Of course in 1970 that money would have chromed half the bike!

I also tried a local motorcycle wreckers for something to use as a rear guard. I plan to put in a 5 x 16 HOnda rear wheel a bit later so figured I'd start with a wide guard. I couldn't find a steel one long enough, so I'll try another wreckers on the other side of Adelaide or chase down an early 80's shovel rear guard which can be cut down. In the seventies you could go to the trailer place and pick up a nice 6" rolled steel guard for $10.

They also have a complete 21" front wheel with a small full width brake for $80. 21" tyre is another $90... but talking to Steve from Stockport, he reckons he just might have one I can have for much less. Need to get to a couple of swap meets fast!

Just speaking with a mate who is building a trike and he reckons a hotrod speed shop he knows, rolls inner guards for what ever size you want. Sounds expensive, but will check it out.

Remember, we are going the cheap way here. If you were building on a budget and decided to stick with the 4" rear tyre, you could get away with a front steel guard which is much more common.
Chopit'nrideit... Prof
Top

Good start and a great concept!
Time to start playing with the Vmax.
Oh and maybe I should finish the trike too!
Top

Bless his socks! Steve had a WHOLE 1981 250 Suzuki trail bike front end. Full width brake, 21" front wheel (with a barely worn knobley tyre) and forks that are in excellent contdition adn work out around 6" over.

Being Suziki and only one year later, the steering head may be a straight swap... we'll find out.

For the moment I'll just put in the 21" wheel to stock forks. For the final version I will use longer forks and stock 19" wheel as I don't want too much wheel flop for inexperienced folks.

Went to another large wreckers, but no rear guards. However, I have located two Harley rear guards for $40 each. I'll cut one of them down for the 16x5 wheel I'll be using also in the final version.

So far I have made a couple of struts out of a very Australian piece of equipment. Paul and I also mae a sissy bar from chain the other night.
I've mounted the remains of an old ribbed English rear guard to cover (?) the back wheel.

Will show you pics when it is done and then we'll put on a set of modified apes and some s/h torpedo mufflers.

By the way... for the first version, I am treating the project as a weekend only job, using only an electric welder and angle grinder, no turning, no heating ie what any guy can do at home.
Chopit'nrideit... Prof
Top

Well, things have happened and we can now show you part one of incarnation one...

The GS400s first incarnation is as a bobber with out extensions.

Second incarnation will be with a longer and raked front end....

Third incarnation will get a sprung rear end with a difference... if my calculations work in practice...


We'll treat the changes in weekend type sections as though the bike can get ridden inbetween... anyway hope the next series of threads are inflormative and enjoyable...
Chopit'nrideit... Prof
Top

I was recently given a Kawasaki KZ 250 A from my girlfriends dad. I appears to be in slightly better condition that the Suzuki featured in this thread. I am using this thread as inspiration and for learning as I am new to motorcycles and am wondering if any further progress has been made on the Bobber?

It pays to check the dates.