LOTS OF HOW TO CHOPPER PROJECT REPORTS... We build choppers the old school way... craftsmanship and artistry. Photos of our work to give you ideas... Aftermarket parts, parts for Shovels, CB's and XS's, our own unique parts for sale...
Post Reply
5 posts • Page 1 of 1

Rod brought in his partly built Trident to have the fabrication side finished. He will then pull it apart, repaint and get it wired up. when it is finished we'll feature it in Chops'nBobbers...

Here's the bike ready to be collected...

Seat has a slim horn style backrest that is beautifully supportive and comfortable, adds lots of class but doesn't take away form the overall lowslung stance of the bike. 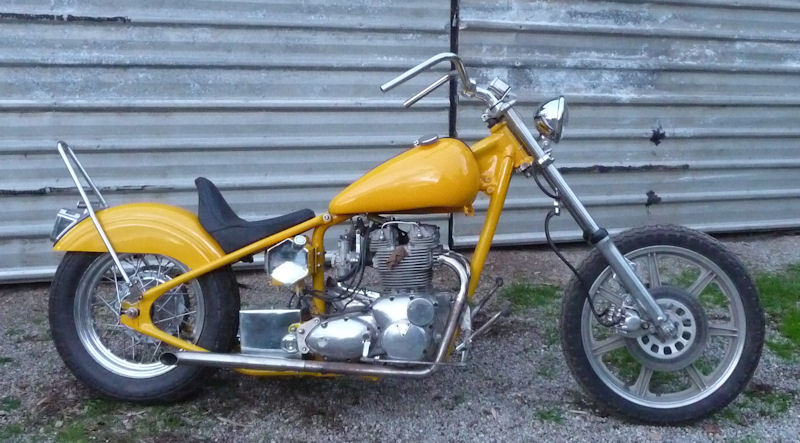 Stainless tank cover. It is bolted to a stainless bar that follows the tank top contour and then dips down to mount the ignition switch.

Bike as supplied, was 2.5" lower at the front and would have been quite dangerous to corner on. I made up 3" slugs our of stainless. Button head on top is in place of cap and is removed when replacing fork oil. 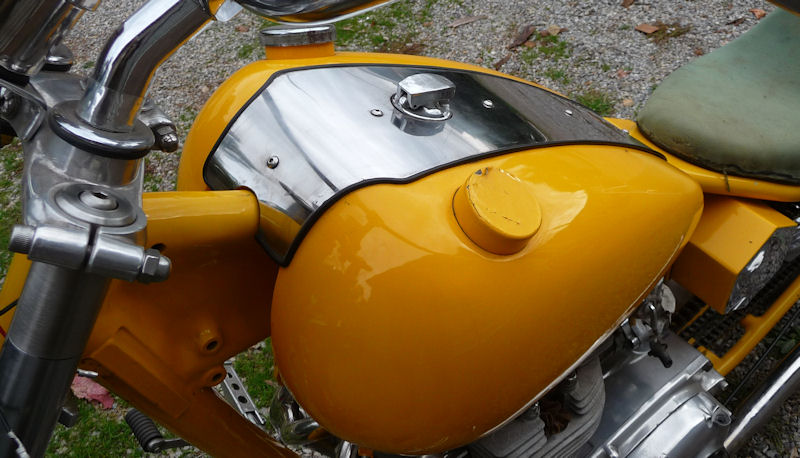 Rear brake posed quite a challenge as the anchor and lever are uncomfortably close to the rigid frame set up. As we are running a cable rather than a brake rod, the neatest solution was to turn the brake plate upside down.

Because the axle plates are quite close together, they allowed only 20mm side movement for getting the wheel out. Slotted anchor works well and holds the brake firm while allowing axle adjustment. Sissy bar was shortened and mounted on top of the brake bracket with a matching bracket added to the opposite side as well. 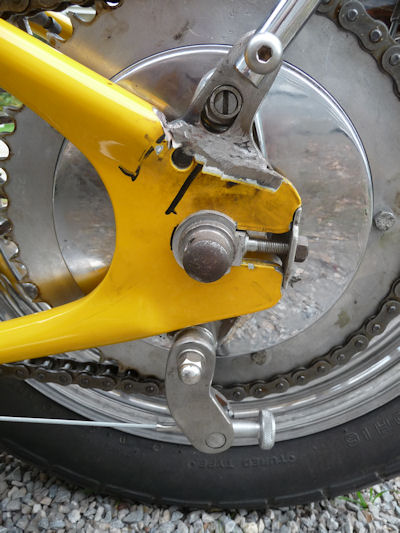 Forward controls used parts Rod had collected. Brake and gear levers are made from HD gear levers. Forwards are mounted on new extended front engine mounts... a challenge in them selves as the person who raked the frame previously drilled his new frame holes very crooked! 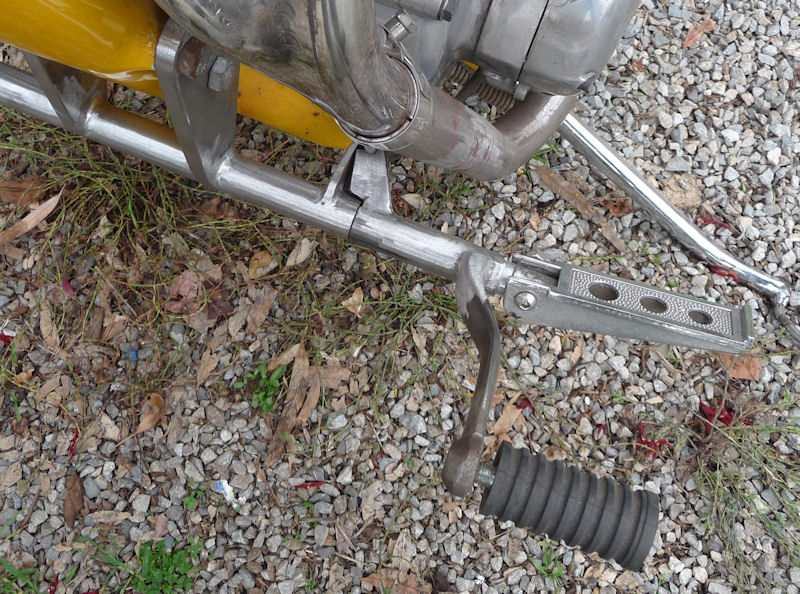 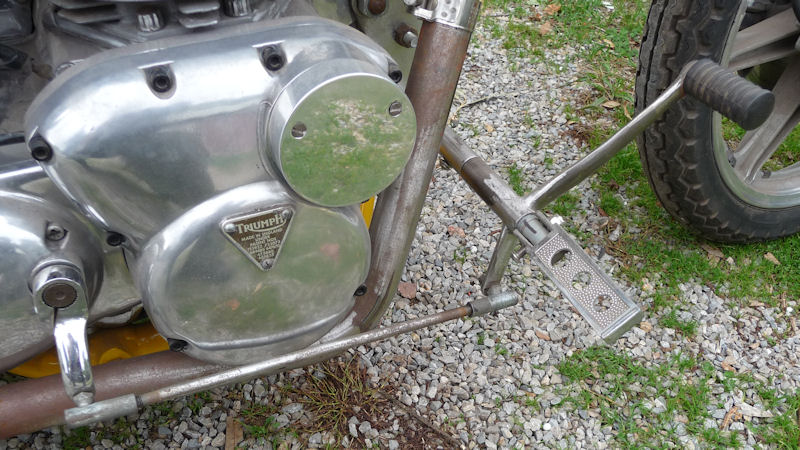 Carbies are no longer supported by an air box, so a simple stainless hanger has been made that is supported by a tapb welded to the top frame tube (just hidden). 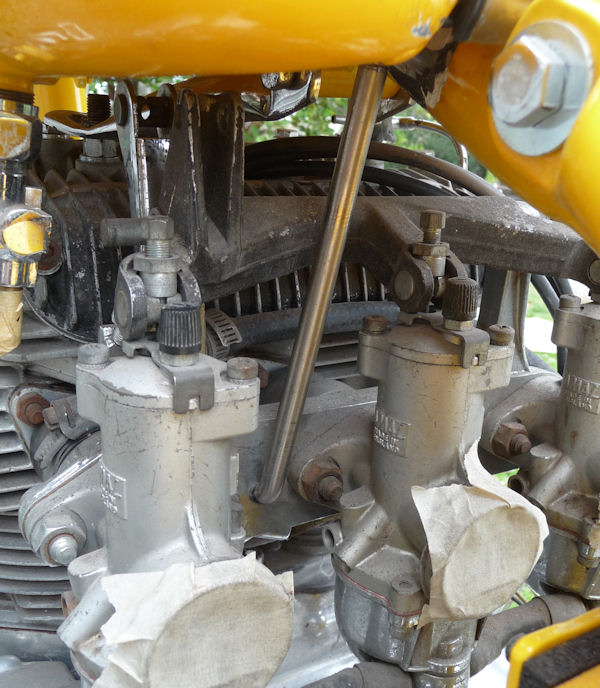 Rear engine mounts are stainless and replace the massive originals. Tail pipes (turnouts) are stainless and have internal baffles that are held by the same bolt that holds the turnouts. Rest of exhaust system was built from preformed mandrel bends and straight pipe.

Battery box had to be narrow to fit with in the swing arm brackets which rod wanted to retain. It contains three coils, glass mat battery and a fuse box (forgot to get any pics). The rear cover bolt doubles as a battery bracket. Some quite tricky fabricating was involved in not only getting it all to fit but to be accessable on that dark rainy night! Horn actually sits upright and covers the swing arm bracket. 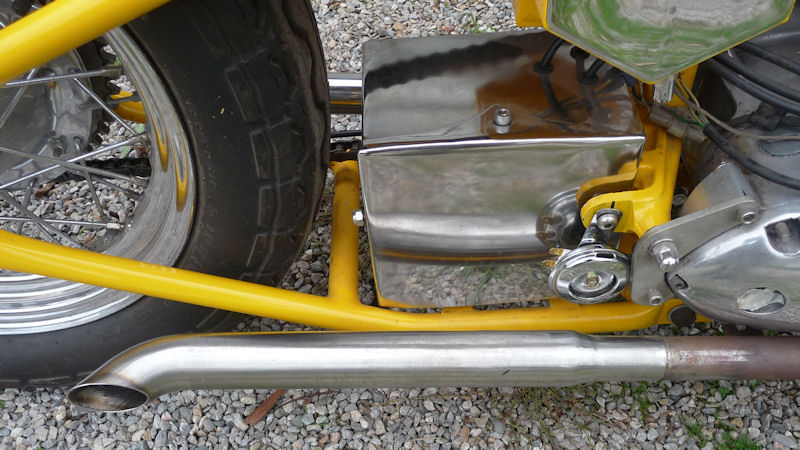 Speedo mount is aluminium crved to match the top tree. End 20 mm was cut so it coud be bent and then welded. This strengthens the bracket so it wont crack along what would otherwise have been a straight bend. you can also see the roll pin that keeps bracket level and allowed the use of only one mounting bolt. Speedo rests in some foam rubber. 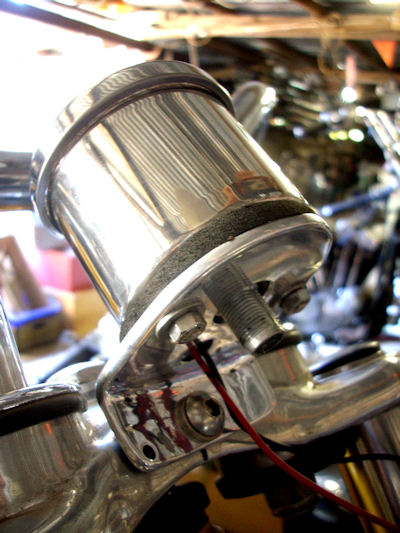 Steering lock on this bike was awful. A simple solution was to cut away part of the existing stops, weld up the holes and give it a very nice lock. 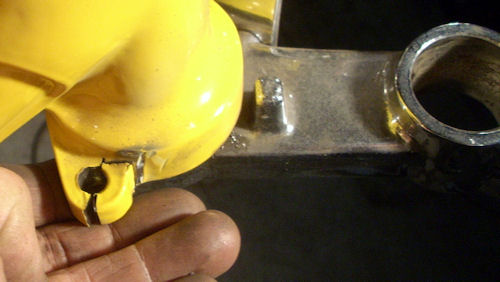 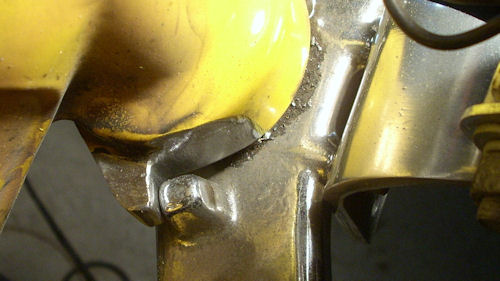 this photo of the seat mount is a bit blurred. the seat is pushed down onto the frame and a knob on a bracket attached to the frame is tightened. Knob with its 8mm thread was off a small pipe cutter. 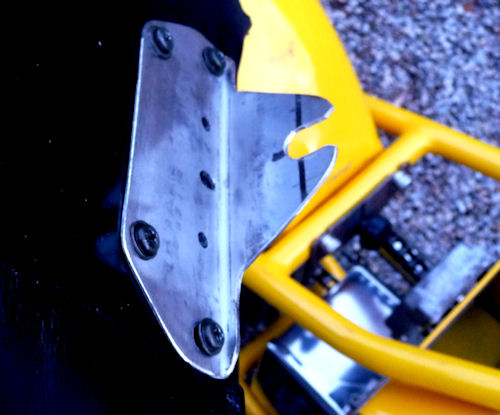 Just one thing, I noticed that the rear brake bracket has the slot offset, was this done on purpose?

If it was done to have thicker material on the side of most load, wouldn't that be the left had side as when the brakes are applied the torque reaction would be in the counter clockwise direction.

I know I'm being a picky little person

It's just I like to look closely at your simple and elegant solutions.

Sorry to take so long to reply, but missed this post Hap.

Yes the force is applied to the thinner side. I can't remember the circumstances that resulted in the slot being offset. The tab is 10mm so quite strong enough.

I like it should come up a beauty . scrap the back gaurd or cut a radius to suit the tyre my oppinion only it just looks wrong
IM NOT CRAZY ITS JUST OTHER PEOPLES PERCEPTION OF MY NORMALITY THAT DIFFERS
Top

Now that does look nice, will discuss this on the weeked
Dave
Top
Post Reply
5 posts • Page 1 of 1