LOTS OF HOW TO CHOPPER PROJECT REPORTS... We build choppers the old school way... craftsmanship and artistry. Photos of our work to give you ideas... Aftermarket parts, parts for Shovels, CB's and XS's, our own unique parts for sale...
Post Reply
2 posts • Page 1 of 1 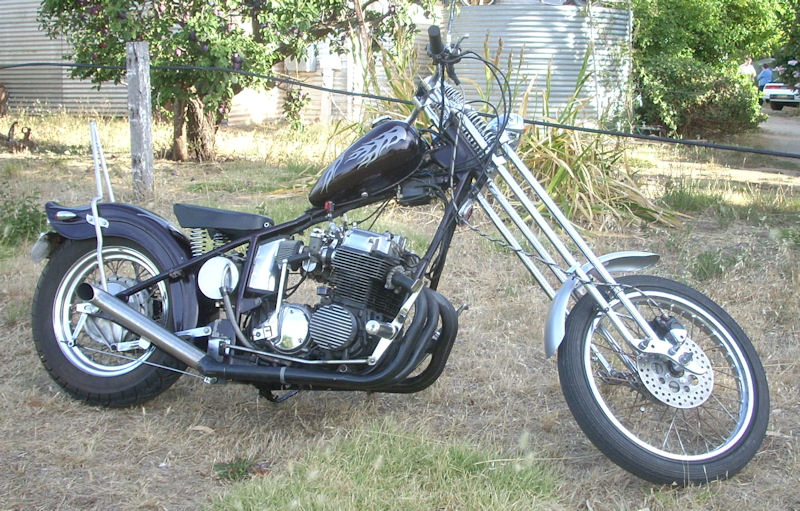 Bob dropped his CB750 chopper off a few months ago for some tidy up jobs. His main concern was to do some mods to his fork rockers to try to improve handling, it proving to be a real handfull at speed when cornering. Also, a softer sprung seat and easier access to his oil tank filler. I only had it for a few days he asked me to do what I could in that time, as he was heading interstate and needed to take the bike with him. Pic above is how it left... 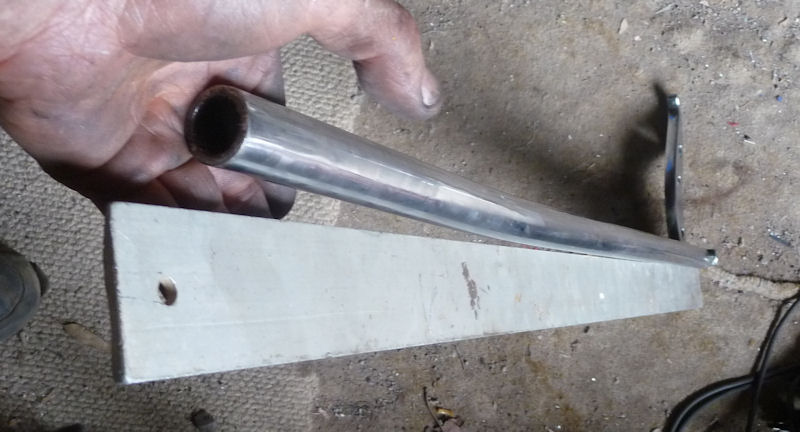 When pulling the forks apart to do the rockers, both back legs proved to be very bent! These we straightenend in the press. It aslo turned out that the threads in the tops of the back legs were stripped and not holding. The rockers were modified to take the front legs forward a bit, which concerned me as the forks were off a Harley and the springs to my mind are too stiff already... this exercise makes the action stiffer still.

Springer springing is a bit tricky as springs can pick up a resonance that even on a flat smooth road can see them developing a bounce (Pogo) and can throw the rider off if he can't get his speed down really quickly. To avoid this, quality springer springs are matched to the bike's weight, the springs are counter wound and the rebound springs are made of a thinner materal and diffferent wind.

Easiest solution I think is to fit a steering damper vertically between the springs, but we did not have time to do this. I also didn't have time to redo the rear leg threads and suggested Bob get them done when he got home.

But a bit more about Bob's springer in a moment...

Oil tank was stainless. First job was to make a cutaway for chain clearance as it was eating its way through the bottom of the tank. When I pulled the tank out of the frame I discovered that the outlet to the engine was 3.5mm diameter! Lucky he hadn't cooked the motor. I capped the outlet so it could be used as a drain and added in a new outlet made of 15mm stainless tube. 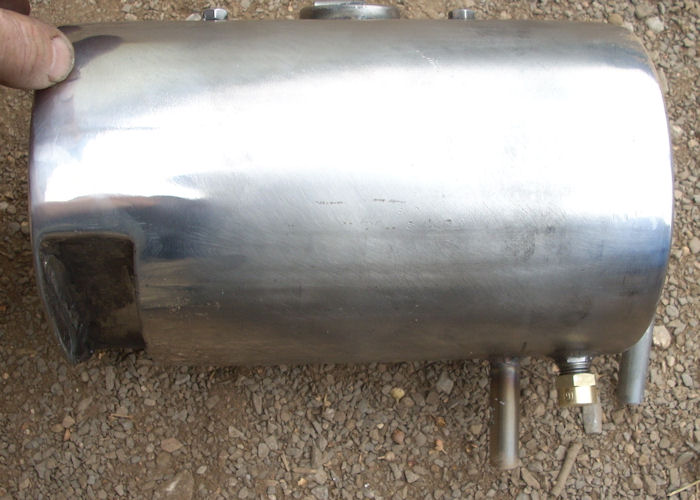 Oil was running out of the top of the tank partly because the cork washer was Kaput and partly because there was no vent. You can just see the vent I installed in this pic. In the pic below are the tools needed to remove and replace the sprung tab in the cap. The piece of hacksaw blade is pushed in between the tab and the spring and the U shaped clips used to hold it out of the way while the tab is removed. Replacement is the reverse. It's a bit tricky but achievable with some patience. New cork washer can be seen. A handle of aluminium was also made as the cap was very tight even with the old washer. It was bolted to the top of the cap and can be seen in the second to last photo. 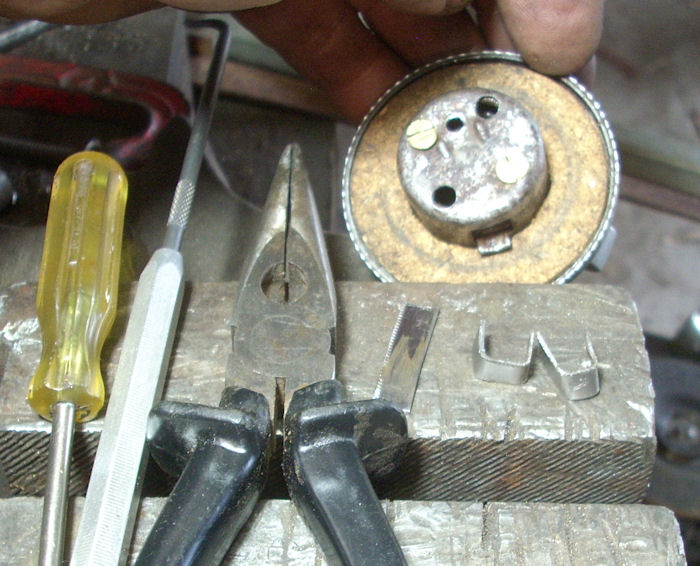 Breather fixed into the neck. Doing it this way meant no welding was needed... tidier I think. 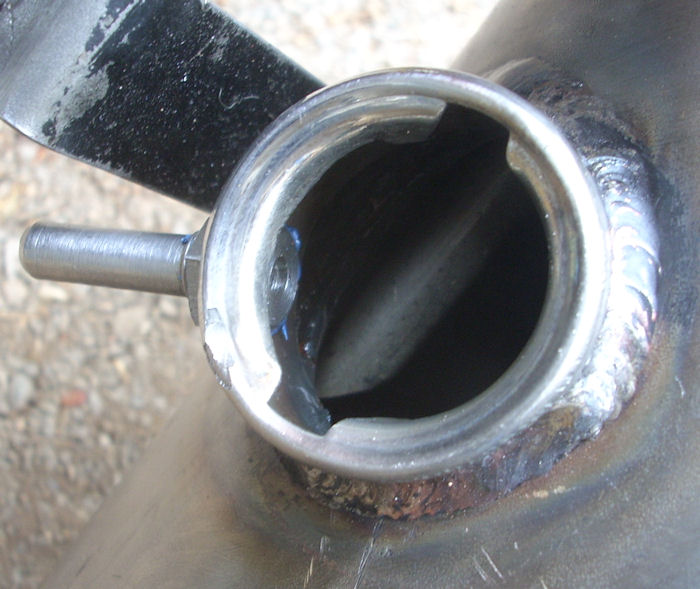 In this pic, the bolt and nut to make the breather can be seen at the top with the final result shown at the bottom... then inserted in a hole drilled in the neck with some Blue Max as a sealer. Frame brakets were also modified to make for a more secure mounting. 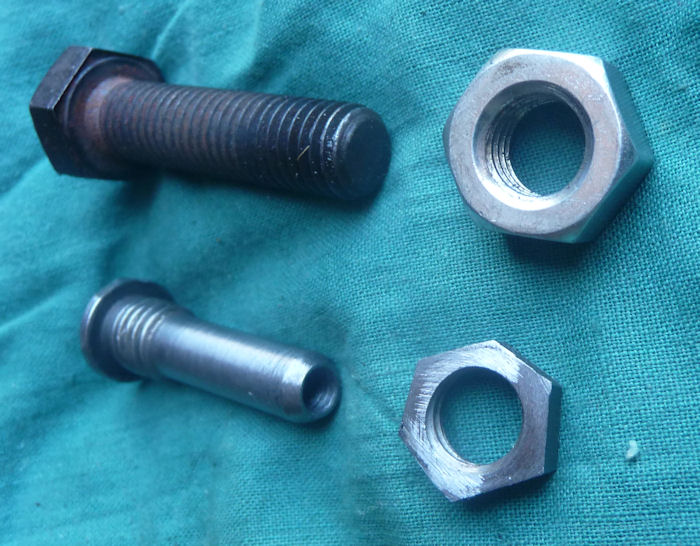 Here's a close up of the seat. It is shorter than we would have liked, but space is at a minimum and the seat needs to clear the rear guard when it moves down with the riders weight over bumps. Consequently I build these seats individually as each bike is different. Bob finds it very very comfy, but would like some more shape in it. This we can do... I'll add some curve to the bottom , add an upsweep at the back and some extra shaped padding get rid of the straight look. Vinyl cover is a temporary job to get him underway. 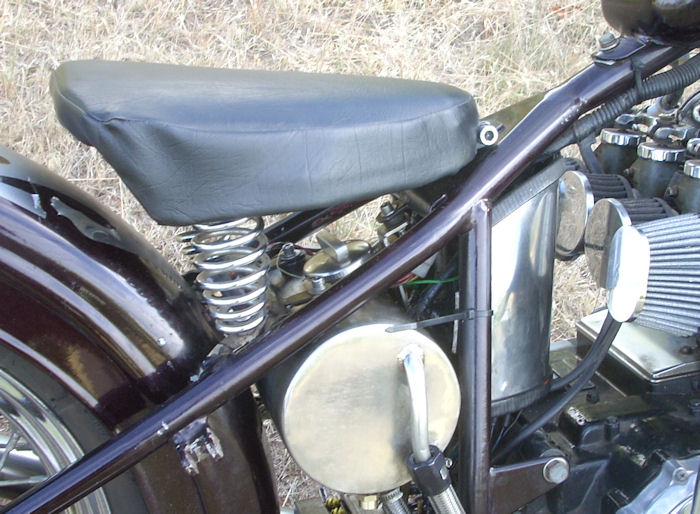 This photo shows underside view and why the seat has a flat top. When the rider sits in it the springs curve which prevents him from slipping backward. Horizontal springs make for a beautiful comfortable ride on a rigid bike. 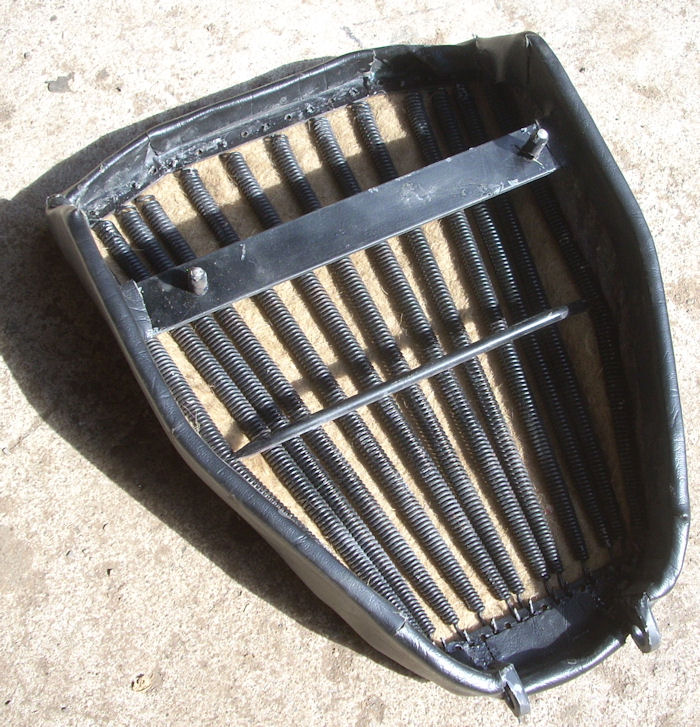 A few other jobs were done, like rebuilding the rear exhaust mounts, but the unbelievable part of the story is as follows...

A rather incredulous Bob rang me up a a few weeks later with the following dilemma.

He had the springer back leg threads repaired and took the bike out for a ride and she handled beautifully. He had a small unsprung saddle in his shed and decided to put it on because the roads around him are pretty good... took it for a ride over the same road and almost came a cropper.

He scratched his head and the only change was the seat, so he rang me up for an opinion. My suggestion was to swap seats back and forth a few times and see what happened as it would be quite possible that the sprung wieght is changed considerably be going from a sprung seat to unsprung and thereby adding the riders weight into the equation.

Result came back conclusive. The springer pogos with a solid seat and is perfect with the sprung seat.

I bring you this story for any others who may run into similar problems with their undamped fornt ends.
Chopit'nrideit... Prof
Top

Re: You won't belive this.... Bobs Honda Chopper

I've been reading up on springer design and function and want to add some more to the comments here on the springer. If a springer is set up correctly it will rarely pogo. Sprung weight should be reduced as much as possible and often an 18" wheel will work better than the 21 incher bob is using. Springer will apparently also handle better if the axle is at least an inch higher than the rear rocker pivot. This is probably a major design fault with this springer... a fact not helped by me initially installing the rockers upside down as seen in the first photo. I've checked a couple of photos of the bike with the rockers reversed and the axle is still too low. A small steering damper set up vertically between the springs works too and a second set of springs inside the main springs is another solution.

I'm soon to be experimenting with a couple of springers and will add to this note when I have some results.
Chopit'nrideit... Prof
Top
Post Reply
2 posts • Page 1 of 1