So I finished building my CX500 touring bike earlier this year and around that time an opportunity came up to buy this bike:

My back didn't like it too much when I was riding it so it was always going to get chopped up. I had messed around with the idea of bobbing one of these 3 or so years ago when I bought the other CX so I thought, why not?

Here's where I'm at now.

I was also making videos along the way with my last bike. I got a lot of good feedback while I was posting them so I kept it up til the end. I figured I may as well keep on with the new bike too. Here's the first couple.

I don't really have a solid direction with it yet. Most likely I'll put struts in for now then consider hard tailing the rear end properly later. I've got some shocks her I could pull apart and cut down too so that's another option. I've looked long and hard at building a springer front for it but I think if I do (which is probably unlikely), that would be long term. Paint? No idea, maybe something rough and used. maybe I don't paint it and just bang it together and ride it. I'll figure it out as I go I guess.

At the moment I have a small bates bottom mount headlight I've picked up ready to mount next time I'm in the shed. I'm also looking at modding the front guard of a VN900 to fit the rear. There's one at the wreckers up the road so I can always buy it, try for a fit then swap it for something else if there's no luck. It'll take some plastic welding to flatten out the section the forks slot into but I think it could work.
Top

Here's the links all proper:

We used to do this with Ace Bars, a quick way to get a bit of height without lengthening cables and it didn't look stock anymore.
Chopit'nrideit... Prof
Top

I did it more for a make do until I decided what bars I was going to run with, but once I'd flipped them I was sold.
Top

Found a pic. My chopper with Ace bars on the left... 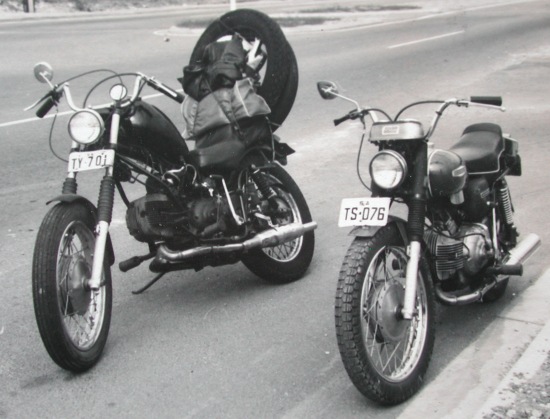 Before this the bike was purple with Z bars and a chrome pointed sissy bar, but the cops kept defecting me, so I painted it black, changed the bars and sissy bar and even though I rode past the Thebarton police barracks (motorcycle cops section) two or three times a day they never bothered me again! Purple must have been a dangerous colour!!
Chopit'nrideit... Prof
Top

That thing is fantastic!

I have to say, I am a fan of the bars turned over like that. They are quite comfy.

What are those two bikes anyway? I can't pick 'em.
Top

1972 Aermacchi Harleys. HD bought a controlling interest in Italy's Aermacchi bike division. They had the 250 taken out to 350 and labelled HD. Quite a popular little commuter for a couple of years. Plenty of torque for a small bike and plenty of get up and go... better than a 350 Honda, but not as quick as the two stroke jap bikes. They were also an excellent handler when stock. Left side kicker was a real pain... no electric start. Left side engine case was too thin and cracked around the kicker shaft so I had one cast up in bronze and machined by my uncle who worked at an SA company that manufactured the pivots for the F111 swing wings. I rode it for three years while at teachers college and building my 1200 U. Did a lot of two ups (with gear) through the state.

At one point I replaced the rear sprocket and they gave me one with a couple of extra teeth. With a pillion I could wheel stand it at the lights in first, seocnd and third... now that was a pose if ever there was and I revelled in it!!!
Chopit'nrideit... Prof
Top

The name popped straight into my head when I read it too. I've seen various things about them before but never met someone who's actually owned one. I guess with that thin case they'd be few and far between now.

My father was so impressed with mine that he bought a later model and it became his favourite all round bike (He always had at least twenty bikes in the shed). 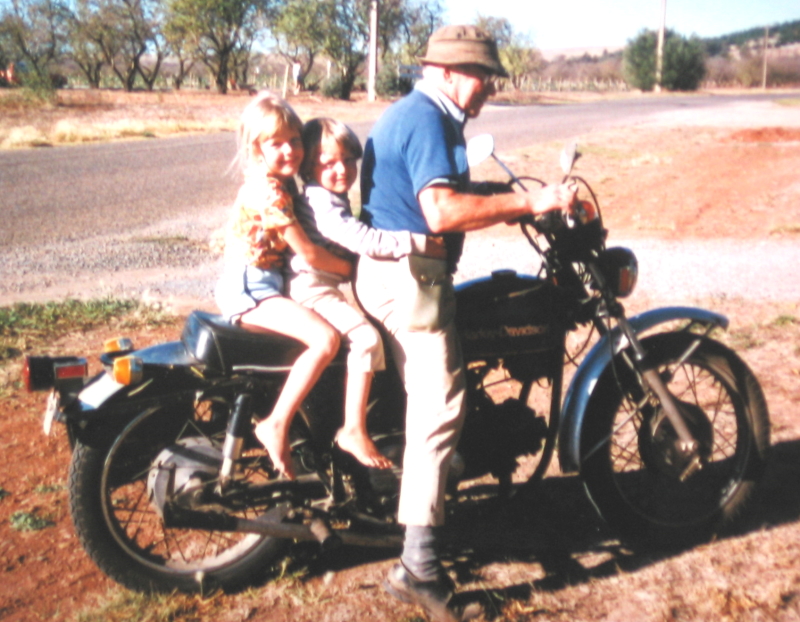 The later model had a full frame and a different looking head (not as neat as the old one) and electric start. Both my boys learned to ride on it. I still have this bike and am waiting to get some time to finish tidying it up back to stock and will put it up for sale... A couple of bikes is enough for me to take care of!
Chopit'nrideit... Prof
Top

Bought a bates style headlight the other day so I made up a mount for it today:

I also got a front fender off a VN900 classic to mount on the rear. Initially I liked it but I've now had a change of heart. Have also dropped the rear another 30mm.

Below is with a simpler rear fender. Also dropped the muffler for now. I'm thinking about dropping them altogether and putting baffles in the pipes. I'll need to check out the legalities of that first as I'm not keen to get defected on the first corner:

Get a couple of exhaust pipe bends and weld them to your headers so you have upsweeps that go through at about axle height. Then you can run slipon tailpipes of what ever design you like including mufflers.

100mm clearance (with 35mm suspension movement) is acceptable for cornering if you keep your pipes tucked in. You'll see some articles on the chopper shed forum about shortening your shockers... gives you a reasonably comfy ride with the short wheel base and narrow back wheel. Just a bit of travel will get rid of the worst road shocks.

If you look closely at my Aermacchi, you will see that I ran a set of forward mounted footpegs. They were mounted on my exhausts and very strong and stable. I set them just far enough forwards to allow me to operate my brake and gear levers with my heels. You can also do it just to have highway pegs.
Chopit'nrideit... Prof
Top

All things worth thinking about. I'm not sure I could chop shocks from 330mm to 200mm though

You could raise your top shocker mounts by cutting underneath and opening up the existing mounts and welding in some extra material... with a bit of extra plate behind for safe measure. Then the shockers mounts would line up closer to the top of the guard.
Chopit'nrideit... Prof
Top

I have been contemplating cutting the whole back end off at some point and welding in a whole new subframe. I'm not fussed about using shocks as the plan has been to hardtail it from the start.
Top
Post Reply
24 posts