Thanks Lou, know what it's like to be ride-less. Been off a bike for year or two myself. Hard to get motivated, but, when ya see all your mates going out, and your driving a car...........

Mind you, I'd drive a Mussy anyday.

Have a good Chrissy and New Years.
The brave may not live long, but, the cautious do not live at all.
Top

Thanks for your Christmas wishes. I had a fight with some metal and flesh came off second best... thumb broken in four places now lots of pins sticking out and a deep gash that is taking its time to heal... so can't do much in the workshop or around home to get ready for the silly season! Never-the-less could have been much worse, so take care over Christmas and best wishes for the New Year.
Chopit'nrideit... Prof
Top

Sh1t Andrew.!! That's no good. Hope all goes well.
The brave may not live long, but, the cautious do not live at all.
Top

Sorry to hear Prof hope you get better soon. I know what it's like to be one handed hard to do any real work, but on the bright side gives you more time for the forum.lol
Top

Thanks for the comments guys. Paul took some pics on my phone which I need to down load and will put for a bit of gore.

Thought I'd get lots of computer and bookwork done, but trying to type one handed when used to touch typing is aggravating. Have also found that the healing process really drains my energy, so have done far less than I expected to. Have got some jobs done for guys in the work shop and have also broken up a pile of concrete and dug a trench one handed... can be done if you hold the tools right!! Had to keep my left hand behind my back to protect it from knocks.

Had the screws out last Monday and now in a plastic cast for three weeks. At least can type again.
Chopit'nrideit... Prof
Top

Goes to show you can't keep a workaholic down. Take care we aren't gettin' any younger
Top

Prof, with bike riding off the agenda for a while , was the trench digging to help deal with the SHOVEL withdrawal symptoms !?!?@@@!!?!!!
Top

Very funny Markee. I replaced a broken clutch lever on the CB750 this morning and worked out that I can operate the clutch with my left hand despite the cast. Was tempting to take it for a quick spin, but unusually for me I am going to be sensible even if just for a bit longer!!!
Chopit'nrideit... Prof
Top

Finally got pics of mashed thumb off the phone...

When it happened. Won't show you the one with the bowls of blood! 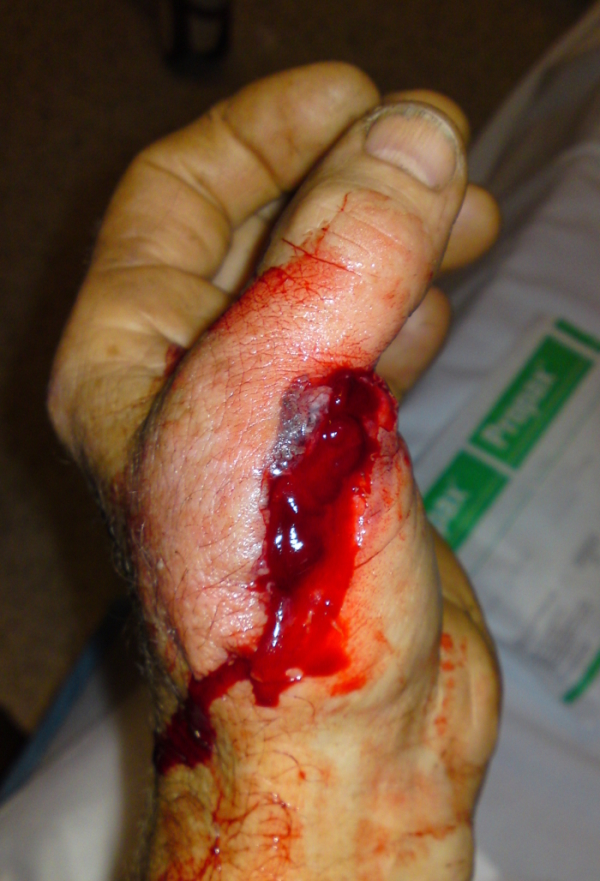 Rig they used to hold thumb bones in place. I suggested they could at least have added a little electric motor and added a swingy thing or something for more interest! 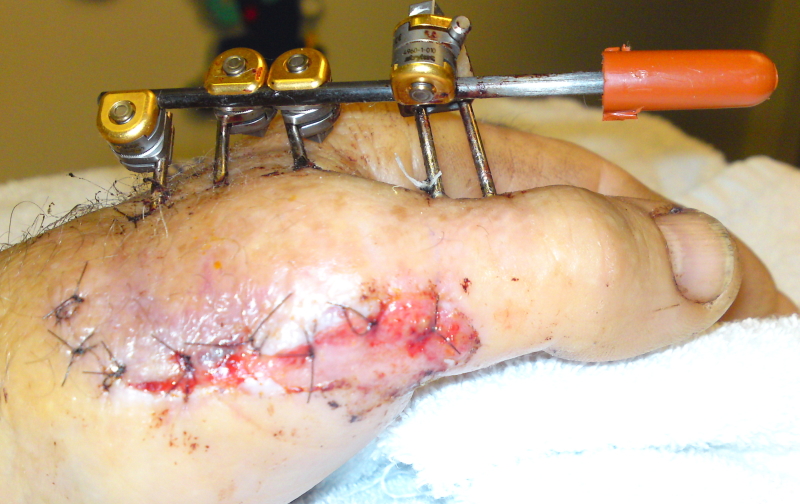 Screws got taken out Monday week ago. Used a tool that was way too big and it levered things around a bit... didn't make me feel all that good and finally had to lie down for the last screw!

I have to wear a plastic cast for three weeks (1.5 weeks to go). I leave it off if I am not doing anything that might bump the thumb, though is should be fairly well set by now. Plastic is very low temp and they shape it by putting it boiling water. It goes completely limp and then they wrap it around the hand until it cools and sets in place. Pretty neat.

Took cast off for this photo last night. Can ride the CB125 fine, and probably the CB750, but won't tempt fate for another week. A lot of numb area and not much strength in the thumb but giving it some very light work to give it the idea. Have gotten used to picking things up between the second and third fingers... now have nickname the claw. 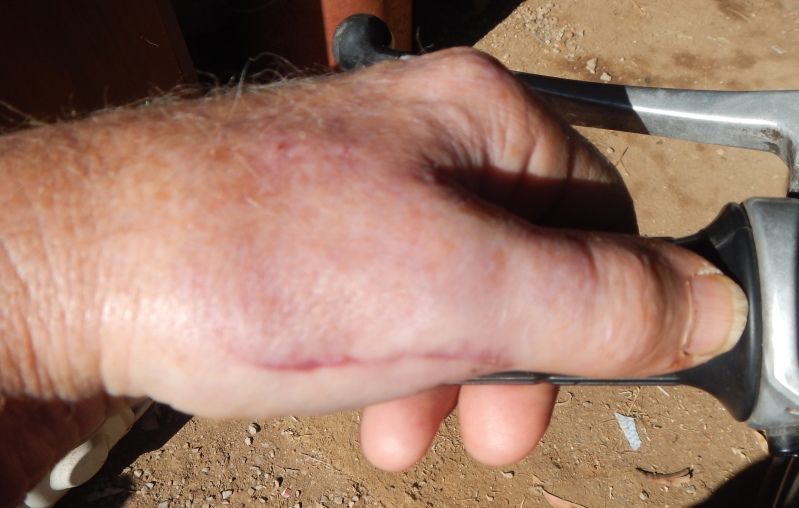 Photo above shows just how much healing has gone on in 5 weeks. Body sure is amazing the way it has been designed to heal. Bloke brought his CB750F in the other day after he'd dropped it. We've had to replace quite a few bits. Man made stuff just doesn't seem to have the same capabilities as our bodies!
Chopit'nrideit... Prof
Top

Nasty Nasty Nasty, lucky you didn't loose it prof or get a serious infection. Looks as good as new now though. But you gotta use it or loose it keep up the physio, Dr Lizard prescribes a dose of shovel clutchin' to keep it movin.
Top

Soon as I get the all clear Lou, will take your advice. Keen to get back on the second love of my life.
Chopit'nrideit... Prof
Top

Rode the shovel a couple of days ago and all fine... really back on the road now.
Chopit'nrideit... Prof
Top

good to hear Prof. Gotta wait till at least mid Feb for the engine in mine to be finished then fast track the brakes and rego. Paint is proceeding nicely, so will be ready to go when the motor is back together.
Top

Sorry to hijack your post with gruesome pics Lou! But I enjoyed a 70 mile business ride on the shovel today. Won't talk about it anymore!!

Mid February will come really quickly. Will be a special moment putting fuel in the tank and hitting the starter.

Any news on how the new Vic regs on club regio are proceeding. I've sent a couple of guys to you for info... trust that was ok.
Chopit'nrideit... Prof
Top

Got some info from Vicroads licenced RWC guy's in club from official documents issued to RWC examiners. I will need a VsI8 from engineer, same as if I were going to put it on full reg. No problem frame has MSO rest is HD or repro. noise will be OK putting quiet pipes on. Lights etc. comply with ADR's . emissions for 1970's engine. then VSI8 will allow club permit (rego) "M plate" As of 1st. Feb,Vicroads say's if it looks like a duck & quacks like a duck then it is a duck. So mine looks like a 1974 engined HD with rigid frame from the 1960's. Was also told but not confirmed that a VSI8 issued to a club cycle or car will allow an "IDENTICAL" vehicle built by another club member to use the same VSI8 report. but must be EXACT duplicate. VSI33 are the Vicroads guidelines for club permit vehicles. will try and attach later.
General info for non RWC examiners, below from ASRF vic. just read motorcycle in place of car as it is the same.
Hi to all ASRF Members and Friends. Please circulate this to all Members on your Clubs Contact Lists.


As you will probably be aware from Feb 1st there will be new requirements for all cars entering the Club Permit System as follows.


1/ Inspections for cars built after 1948 will now be RWC only. Club Safety Inspections or RWC’s will continue to be accepted for pre1949 Cars going on H or SR Plates.


2/ Vicroads “Vehicle Safety Instruction” VSI8 is used to review whether a car is modified to the point of needing an Engineers Report. Vicroads have now issued an additional VSI specifically for CPS cars (VSI 33) which allows common simpler modifications such as engine, gearbox, diff and brake upgrades without the need for a VASS Report. These cars will still use H plates. VSI8 and VSI33 are attached in PDF form.


3/ Post 1948 “Modified” Cars (those beyond VSI 8 and VSI33) require a report by an approved Vicroads VASS Engineer and will be issued “M” plates. These cars should be inspected to VSB14 with some concessions for engine capacity limits, collapsible columns and lane change testing, depending on year of manufacture.


4/ We now need to electronically store photos taken front, side, rear, driver’s position, and chassis/engine numbers. Please have these available when you request us to prepare a new CPS H or SR Application, preferably sent by email in compressed jpg form. These will supplement photos taken by the RWC mechanic.


5/ There are new requirements for us to maintain a Register of all cars we put on CPS plates and additional auditing of the associations and office bearers.


6/ There are no changes to the Street Rod SR Plate system. New Rods still need SR1 VASS Reports to NSRG and inspection by the ASRF, and we will continue to issue SR2 VASS reports for existing Rods changing hands or transferring to CPS from full reg for all our members.


7/ These changes are not retrospective and we do not require yearly inspections or new photos of existing cars, but any cars that were highly modified and should have had VASS Reports and didn’t should be corrected asap. Ie a VASS obtained and a switch to M plates arranged. Those who were put on H plates and always had a VASS report can switch to M plates to help re issues with the correct classification of their cars if they wish on request.


Hopefully this will all go smoothly, any questions you know what to do.