Pics of yours or other interesting bikes taken out and about. Reports of Choppers Australia rides, with lots of photos and great stories. If you are not confident writing up a story, email Prof & get some help... choppers are all about riding, so let's hear your stories.
Post Reply
2 posts • Page 1 of 1

I decided to take a couple of hours off this morning to join in on a CA ride to Milanf. Told Kevin I would only come to Goolwa as I had a customer coming at 2pm.

Jason rocked up to the workshop half hour early as I was expecting the others to come by and check out a couple of projects that are looking good. At half past they called us from the Willunga servo to say they were not going to come by, so Jason and I roared off to meet them. Fuel up and air pressure check ( I have a slow leak in the rear tyre) and off we all went. I got this photo of one of the riders on an evo custom with a wild old school paint job, but otherwise was content to stay back and enjoy the wind in my face and the roar of my open pipes... 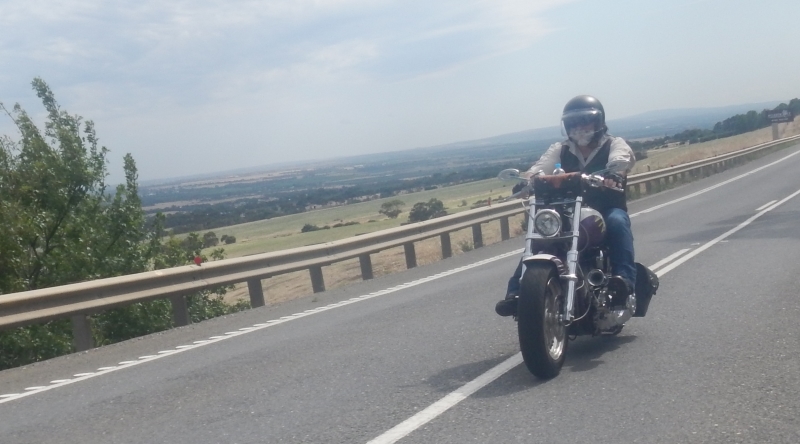 We turned off before Myponga and then onto the Victor Harbor road. After the turn off I accelerated ahead and sat behind Kevin as we all pelted over the rough (typically) bitumen road. Good thing I did because some miles later one of the riders raced up to tell me something had fallen off my bike. It was my phone which with all the bumps has slid out from under an octos strap on a bag on my pillion seat. I did a quick U turn and headed back to look for it. Rode about two miles in low gear turned and then slowly retraced my route. I was putting along in first gear to the left of the white edge line when a rider on a sports bike pulled over coming from the other way. Was I having trouble with the bike? No. Lost my phone. He had seen it on the road some miles back and took off with me following to find it. About 6 miles back there it was sitting in the middle of the lane. Got off the bike with much trepidation as the phone is new. Lo and Behold; despite a cracked screen it was still functioning.

Well. All very providential. Had I not moved up in the group no one may have known I'd lost the phone. If this sports bike rider hadn't hadn't cared enough to come back and check on me... and then go looking I would never have found it. If the phone had slid into the grass we would not have found it and if it had ended up anywhere else on the bitumen it would probably have been smashed under car wheels because there was a lot of traffic. As you will see, it also meant I was able to offer a biker new to choppers some help on his newly procured machine...

The rider wished me luck and took off. My many thanks to you sir. A real gentleman.

Back on the chopper I stepped up my speed as I figured the rest would be waiting for me on the outskirts of Victor. But I ended up being slowed right down by a long line of slow moving cars prevented from passing the slowcoach up ahead by double lines. Riding through this section of road is really enjoyable as for most of its length it is over hung by gums, so you almost feel as though you are riding through a tunnel... especially at night. So I just sat back and enjoyed my burbling pipes and the breeze, sitting down in my low slung chopper until we arrived at the main road and I was once more free to put on a respectable turn of speed.

Enter the outskirts of Victor and no bikes. Hmm! First roundabout and surely they will be parked at the servo. No. Kevin said they'd go through Goolwa, but surely they would wait for me here. Better check out the main street and esplanade. Lots of traffic on this lovely sunny day. Idle along the main business street. See a nice bobbed Virago parked. But better look for the other guys first. Cruise through likely places, but no sign of them. Well thirsty now and need to stop and five them a call. Pull up alongside the Virago. A bloke on a seat says it belongs to a bloke in a little coffee shop. I peer in the door, but no biker in there. Walk down the street and pick up a drink and go back and call Kevin and Jason while I drink up. No answer. Get back on the bike and the phone rings. It's Kevin. They are at Goolwa. I had noticed a bit of a top end rattle (loose tappet) so figure might be best just to mosey off home and I tell him that. 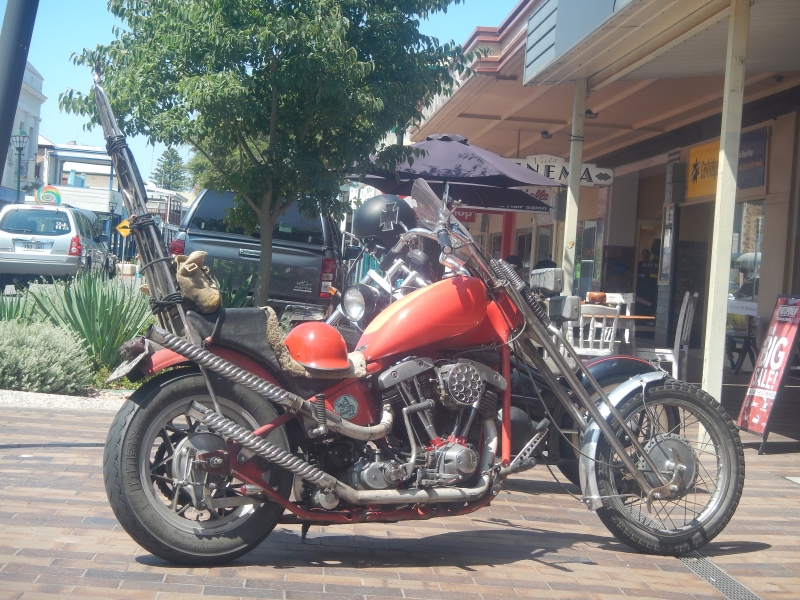 Fire up the shovel and as I back onto the street a bloke comes out of the coffee shop looking at me. I point to the virago. He nods so I switch off and push her back in. A good chat follows. He's just bought it and loves riding it. But no suspension so needs springs under the seat and a few other bits, so we make a time for him to come to the workshop. 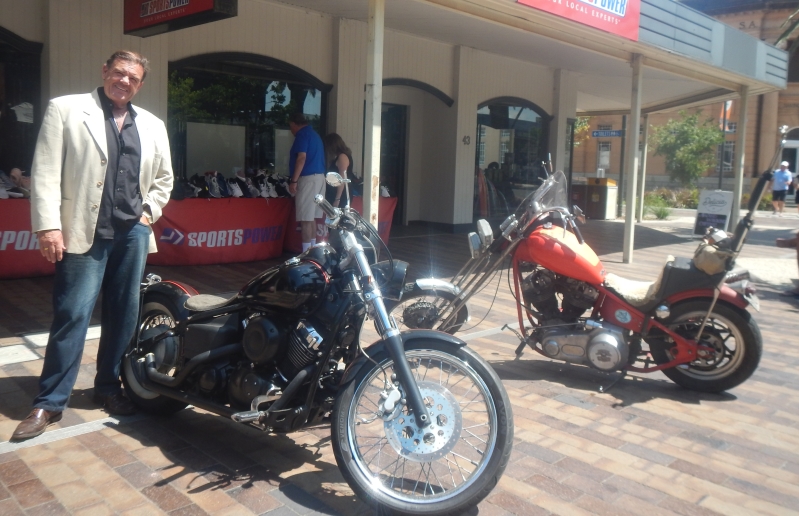 Back on my lovely girl and we just cruise sedately enjoying everything there is to enjoy about riding a big V twin chopper on a perfect day on a fairly smooth road with lots of nice sweeping bends.

Quick spurt down old Willunga hill, scraping both sides of the chopper as I sweep through the bends at maximum speed. Exhilarating as I know the road well and can ride up or down it at speed safely.

Home just in time to find a customer (and supplier of sec. hand chopper material) waiting in the kitchen. Will get to the loose tappet this week amongst working on three customers' bikes as well.

So there you go. A ride doesn't always end up as planned, but that kind is often the most memorable. Haven't been able to do any decent rides for months now, so it was good to be out of my normal habitat even if only for a short time at least.

I hear the others had some fun too, with a breakdown just out of Goolwa that took a while to sort out.
Chopit'nrideit... Prof
Top

Love the twisted tubing on your exhaust tips Prof!!